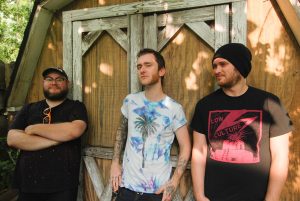 (Editor’s Note: An abridged version of this story appeared in Ghettoblaster Magazine, issue 39.)
In many of the funniest and most effective comedies the protagonist’s best friend and comedic foil tells it like it is at the right place and right time.  Done properly, this biting, humorous and truthful commentary can steal the show.
Dayton, Ohio’s The Raging Nathans assume the musical equivalent of this role with their biting, truthful delivery.  Their forthcoming LP, Losing It, swings for the fences in ways that punk predecessors like Screeching Weasel, Face To Face, and Off With The Heads have before.  But, come toe-to-toe or cross the band, and you might find them swinging for your face or knees…or in the very least, stealing your scene
“The songs are all very personal,” admitted vocalist/guitarist Josh Goldman, who has also done time playing with punk luminaries The Queers, and The Slow Death, Iron Chic and Dopamines. “ There is really no beating around the bush.   I just wanted to be completely honest with myself and I think it might make a few people I know uncomfortable because there are songs about specific people.”
Together since 2007, the band, a trio that includes bassist Dereck Brown and drummer Nick Hamby,  concentrated on  building a fanbase through touring and participation in annual music festivals like The Fest in Gainesville and Pouzza Fest in Montreal Canada. Before now, they’d only released a self-titled 7?  on Goldman and his fiance’s label, Rad Girlfriend, in 2012.
“It took a while to get serious about this record because I was always touring with other bands,” Goldman confessed.  “But since there was no pressure and we knew it was gonna take that long it allowed us to write the best songs we could.  We recorded it how we wanted to, we got the art we wanted.  I think that we were able to accomplish putting out a solid record because we knew that we weren’t going to release anything until everything was just the way we wanted it and we were not going to compromise on that.”
For Losing It, the band enlisted engineer Micah Carli, who also plays guitar in Hawthorne Heights, for the recording.
“We really wanted to record with someone who knew what they were doing and had rad gear we could play with,” Goldman joked.  ”We recorded 17 songs in three days.  I recommend him very highly, not that he needs my recommendation.”
The album sees release in October 2014, a team affair between Dead Broke Records, Rad Girlfriend, and Recess Records.
“I was on tour with Iron Chic and Mike Dumps, who plays bass for them, also runs Dead Broke Records.  I got the mixes while on the road and I played them for him and he said he was interested in doing it with me.  Which was super awesome because he’s an incredible human being and runs an amazing label.
“Dave Eck, from Lucky Lacquers suggested that I send the record to Todd Congelliere, who runs Recess.  So, on a whim I sent Todd the record and he also agreed to do it.  That was mind blowing for me because I absolutely thought he would politely decline,” Goldman confessed.
The process of completing Losing It appears to have opened the floodgates.  The band also have a 7? coming out on Dave Eck’s Jukebox Records, the recently submitted songs for a split 7? with The Slow Death and they have plans to release another 7? and are writing another LP.  The band will also be touring aggressively in coming months.
“We are gonna be doing an east coast tour for a few weeks in October and then we will be doing a Midwest tour after that,” Goldman shared.  “We would really love to go to Europe soon too.  Honestly, there’s no slowing down for us in the forseeable future.”