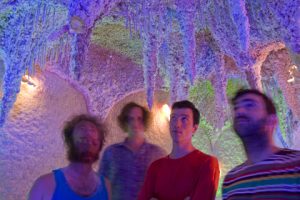 On October 15, emerging from Drag City, is CAVE’s Threace.  The dance floor psychedelia of Threace is sure to infiltrate clear eyes and full hearts of the world.  Best of all, Cooper Crain (guitar, organ), Jeremy Freeze (guitar), Dan Browning (bass) and Rex McMurry (drums) have a full month of shows lined up where the jamz of Threace are going to be spread thickly across the American nations (dates below)!
Ghettoblaster recently caught up with Crain to discuss the record.  This is what he told us.
How much of Threace was planned out in pre-production and how much was jammed onsite?
About half the record was planned all the way, the other half was worked on day of recording.
You guys recorded this album on a 1” 8-track machine, right?  Was this done in a studio?  Are you analog devotees?

It was actually done on a 1″ 8-track Scully 280 machine.  We did it at the same studio we’ve done our last three records, Minbal here in Chicago.  We like to track to tape, the more we can do live the better.  On most songs we did it straight up on 8 tracks. On some others we overdubbed here and there adding to the initial 8 tracks later.  But for the most part it was kept to being a live recording on 8 tracks.
Cutting tape has to be far more time consuming than editing digitally.  What pitfalls and challenges did you have with that process?
Cutting tape is more time consuming, which is why we edit digitally.  We’ve dealt with cutting tape before, it can work out, or it can be very bad and you find yourself adding this tiny piece of tape your digging out of the trash to make up for editing the wrong spot.  If we were making a small edit here and there it’ll be easy, but we were combining multiple takes and individual instruments. I was very much inspired by Teo Macero and his work with Miles Davis while thinking of the cuts to make.  I figured if we had to go the tape only route, we could’ve, but we were able to make it so much more interesting and have it move better cutting it digitally plus the time we would’ve spent making sure the edits were right on tape would’ve added up.  The source is from tape so why not make it easier on ourselves?
We were able to jump from take to take, add dynamics and even just pull out one instrument from time to time and replace it with another take of that same instrument. But this was only on about two and a half songs out of the five.  The rest was done just straight up as you hear it.
What is it about the relationship between the members of CAVE that makes this project so rewarding?

We can play off each other in a special way having been doing it for a while. So we took to that advantage and started making up music on the spot with a purpose of editing it later.  Getting sound from the mic and writing based off of that.  Keeping tempos close and trying to think about a take being a part. We know how to work in the studio based on what we’ve done in it before.  This was a challenging project which took a long time to finish, but I think we are all very happy with the outcome.
CAVE are playing the Crop Out Festival in Louisville, which is sort of billed as the outsiders music festival.  Do you feel like outsiders or are music fans more interested, devoted to discovering experimental music these days?

No, I think experimental music has a strong following around the world.
What do you have planned for that set?  How much experimentation takes place during the live performance?
We will be a five piece by this performance.  So we’ll have more variation of sound hitting the audience.  We try and keep it tight for shows, making sure everyone knows the stops and starts of songs and parts. But there are usually a few songs that have some pretty loose areas.  We’ll likely have some new material to play which we’ll be just messing around with, this is how we get a song ready for recording, just playing it at shows and changing it up from time to time to make it right.  Seeing how people reacted to it and thinking of ways to make it better before the next show.
Do you find that most CAVE devotees are from your homebase in Chicago, or do you get a more welcome reception in other parts of the country?
Chicago is deep with CAVE, but this is where we’ve been playing for the last six years.  We try and play venues that will be appropriate for CAVE, so it seems like each show there are the right people there who are interested in what we’re doing and are there to see what happens.  The midwest is great to us.  Spain is the best for CAVE shows and fans.
The Bitchin Bajas release also came out this year.  Is it a desirable place to be in to be in the middle of two album cycles or do you wish it had happened differently?
I do wish I would’ve had a little more time between the releases, but this is how it goes.  Both records were being made at the same time and I was able to keep them pretty separate sounding.  This is what I do though, so its ok. I might try and space it out a little better next time.
Will there be touring in support of Threace?
CAVE will be touring through four continents all for Threace.  North America, Australia, New Zealand, South America and Europe.
(WATCH CAVE’S “SHIKAAKWA” VIDEO:
http://bit.ly/1firACA
Catch them on tour here:
Tue. Oct. 8 – Missoula, MT @ VFW Post 209
Wed. Oct. 9 – Olympia, WA @ Northern
Thu. Oct. 10 – Bellingham, WA @ The Shakedown
Fri. Oct. 11 – Seattle, WA @ Triple Door (Seattle Psych Fest)
Sat. Oct. 12 – Portland, OR @ Dante’s
Sun. Oct. 13 – Eugene, OR @ The Old Whiteaker Firehouse
Mon. Oct. 14 – Eureka, CA @ The Ink Annex
Tue. Oct. 15 – Sacramento, CA @ Bows & Arrows
Wed. Oct. 16 – San Francisco, CA @ Elbo Room
Thu. Oct. 17 – Oakland, CA @ LCM
Fri. Oct. 18 – Los Angeles, CA @ The Satellite
Sun. Oct. 20 – Tucson, AZ @ Solar Culture
Mon. Oct. 21 – Marfa, TX @ Padre’s
Tue. Oct. 22 – Austin, TX @ Hotel Vegas
Wed. Oct. 23 – Houston, TX @ Mango’s
Thu. Oct. 24 – New Orleans, LA @ Siberia
Fri. Oct. 25 – Birmingham, AL @ Bottletree
Sat. Oct. 26 – Athens, GA @ Caledonia Lounge (Athens Intensified Fest)
Sun. Oct. 27 – Asheville, NC @ The Mothlight
Mon. Oct. 28 – Boone, NC @ Black Cat Burrito
Tue. Oct. 29 – Columbus, OH @ Double Happiness
Wed. Oct. 30 – St. Louis, MO @ Plush
Thu. Oct. 31 – Columbia, MO @ Mojo’s
Fri. Nov. 1 – Iowa City, IA @ Trumpet Blossom Cafe
Sat. Nov. 9 – Detroit, MI @ PJ’s Lager House *
Sun. Nov. 10 – Toronto, ON @ Horseshoe Tavern *
Mon. Nov. 11 – Montreal, QC @ Club Lambi *
Tue. Nov. 12 – Allston, MA @ Great Scott *
Wed. Nov. 13 – New York, NY @ Mercury Lounge *
Thu. Nov. 14 – Brooklyn, NY @ Knitting Factory *
* w/ Wooden Shjips)