Celebrating it’s 45th anniversary and 10th year in Indianapolis, Gen Con is a city unto itself for four-days every year. This August over 40,000 people (around as many people who live in Hagerstown, Maryland) filled up the capitol of Indiana’s hotels, restaurants and all 400,000 square feet of the Indiana Convention Center. To take a few liberties with a movie line you may be familiar with, “Gen Con Indianapolis. You will never find a more awesome hive of scum and villainy. We must be cautious.””
Though the main focus is gaming – whether with cards or dice, boards or imagined dungeons – there’s so much more going on. The event book is as dense as most city’s yellowpages and uses the same small font size (although this year Gen Con introduced a smartphone app for that – good call).
Having a better handle on how Gen Con works from attending last year, gaming took a little bit of a back seat to exploring some of the other things going on. This is what we did…

Gen Con – Drinking
Another nerdy interest shared by Ghettoblaster and a good number of Gen Con attendees is craft beer. If you don’t know about the beer renaissance that we’re currently living in, go find yourself a bar with more than a dozen drafts and prepare to get your mind blown. Double IPAs, smoked porters, cherry lambics, Belgian triples, bacon maple ale… if it’s not poisonous than there’s a good chance someone’s making a beer out of it.
Knowing of the healthy middle section from the beer geeks and gaming geeks Venn Diagram (what else do you plan to do during a rousing 10-hour game of Avalon Hill’s Civilization?), Indianapolis brewers have gotten in on the festivities and we had a chance to talk to two of them.
RAM Restaurant & Brewery, makers of “Woldwrath’s Omnipotent Ale” in partnership with Privateer Press

Sun King Brewery, makers of “Ale of Destiny” in partnership with Gen Con 2012


Gen Con – Gaming
As you can tell from last year’s Gen Con review (http://ghettoblastermagazine.com/2011/show-review-gen-con-2011-day-1/) it’s easy to dedicate your entire weekend to play testing new and new to you games. As North America’s largest analog gaming event, everyone who’s got a game to sell is selling it at Gen Con. The big companies like Rio Grande (makers of Carcassonne, Power Grid and Dominion), Mayfair (Settlers of Catan) and Wizards of the Coast (Magic and Dungeons & Dragons), along with smaller publishers like Z-Man Games, Fantasy Flight, Days of Wonder, new comers Cryptozoic and even self-published enthusiasts, are all staffed with folks ready, willing and able to help you play through their games.
With a ginormous exhibitors hall, it takes a good three hours just to walk through all of the booths – and that’s with us only glazing over the card-collecting games and RPG stuff. If you want to stick around and play test some games or root through some of the boxes of used stuff for a bargain, blowing an entire day here is no problem.
While there was a good amount of fanfare over Mayfair’s Star Trek-themed Settlers of Catan, the new release standouts for us came from Cryptozoic’s Hot Rod Creeps and Privateer Press’ Level 7.
Hot Rod Creeps is a mix between Hot Wheels, Mario Kart and Adult Swim. The “board” invites the Hot Wheels comparison as players are allowed to fashion their own courses with connecting pieces of track, complete with a jump and ring of fire. The play is reminiscent of a PG-13 Mario Kart, where you can trick out your racer with special wheels, engine boosters and weapons… and yes, you can spin out on banana peels! The Adult Swim connection comes with the amazingly vivid art done by Dark Horse Comics colorist, Dirk Erik Schulz. If I could string together a bunch influences in my head for a completely original and kickass game, these would be them. Having recently released the equally awesome games Food Fight, Locke & Key (based off of the IDW comic series) and Epic Spell Wars of the Battle Wizards (with art from Superjail’s Nick Edwards), Cryptozoic is quickly becoming one of my favorite publishers. 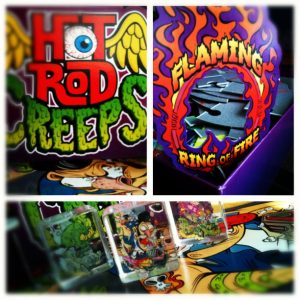 More known for their RPGs and miniatures, Privateer Press’ Level 7 is a new adventure for them (pun intended!) as a tile-placing board game. The story is that you wake up in a plastic bag, freaking out, in some military facility where shady intergalactic science is going down with the tacit approval of the US government. Of course, they don’t have your approval so you’re going to try and high tail it out of there, organs and/or anus intact and unprobed. The lines to play-test this one were pretty impossibly long, but the art and concept were strong enough to sell this game alone. Watch the preview movie below, but don’t watch it alone.


Gen Con – General Nerdiness
Trying to get a better idea of the wide range of things happening at Gen Con, we ventured outside the lure of the exhibitors hall and into the surrounding smaller convention hall rooms and even out into the hotels. Movie screenings, live music, comedy improv, lectures, symposiums –the event book is as thick as a yellow pages remember?
Friday night was highlighted by Dead Gentlemen’s Dungeons & Dragons interactive comedy improv (well, Pathfinder was the system… if you know your stuff enough to care). Though it might not click immediately, role-playing games are pretty perfect for improv. Throw actors into a series of situations, utilize a 3’ x 3’ D20 while inviting audience participation for further randomness – allow hilarity to ensue. The only drawback was holding the event in the ballroom, which was far too large for any audience interaction to really work.
After the hour long show was over the decision to use the large ballroom finally made sense as the performance turned into a on-site filming location for Dead Gentlemen’s upcoming film, The Gamers: Hands of Fate with us as extras. From what could be cobbled together from limited lines and broad stroke production summaries, it seemed like it will be an entertaining and well-produced flick. The project is in the process of getting funded via Kickstarter and they’re still about a third shy of their goal. Check out http://www.kickstarter.com/projects/zombieorpheus/the-gamers-hands-of-fate for more info or just watch this:

Saturday was highlighted by probably one of the oddest but most entertaining events of the entire weekend, geek burlesque – the strip-show you can take your wife or girlfriend to! Gen Con actually hosted two troupes this year and we were fortunate enough to be hosted by the lovely ladies of D20 Burlesque for their packed out (with an entry line that wrapped around itself… twice) performance at the nearby hotel.
D20 was founded by dancer, Anja Keister as an outlet for her ideas that were deemed a little too weird, nerdy or obscure, though they certainly weren’t too weird, nerdy or obscure for Gen Con! The audience ate up dances from Cthulhu, Mario, Mortal Kombat’s Jade Mortal, a zombie (you’d be amazed all of the things she could take off), a Sniper Wolf/furry mashup and a grand finale from… the classic board game, Risk! As something you can’t see most anywhere else (check http://www.facebook.com/D20BurlyQ for dates proving exceptions to that), I’m hoping that they’ve already started talking about booking them again for Gen Con 2013. 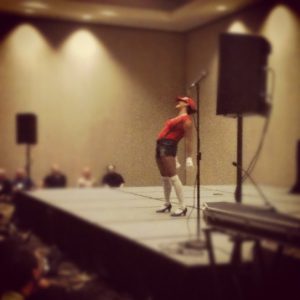 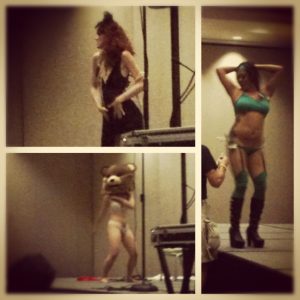 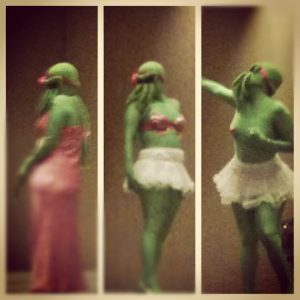