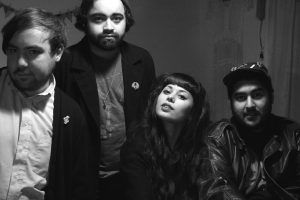 By Tommy Johnson
Sacramento-based group G. Green’s front man Andrew Henderson started recording music on his own during his senior year while living in Utah. When he moved to Sacramento after high school, he began catching some of the local acts at night. During the day, Henderson wrote and recorded what he loosely described was “noisy, blown-out indie rock”. His music started to get some spins on a local college radio station, catching the eye of folks within the music scene. When he got asked to perform in one of the local shows in the fall of 2009, he had developed an idea.
“I got asked to play, and I was thinking that I should get a band together and do something cool,” Henderson said. “It just like ‘Let’s just see what happens.’”
He recruited drummer Liz Liles, guitarists Michael Feerick and Rod Meyer. Henderson lightheartedly added when talking about assembling the band, “They were my closest friends, and they can play music. So I forced them to be in the band.”
The show was well received by all who attended. Afterwards, G. Green was asked to continue playing around town at other venues. Everyone was onboard with idea, and they continued to play up to eight to ten shows a month. They also went decided to go into the studio and recorded their debut Crap Culture.
Crap Culture features a towering range of distorted sound and unrestraint aftermath blaring through the speakers. The album is highlighted with the screeching vocals of Henderson. Thrashing around him are the fuzzed out chords being churned out from Feerick and Meyer, along with the aggressive drum play coming from Liles. Crap Culture heavily features lo-fi, wildly careening noise-punk from the uninhibited rockers.
However, Crap Culture’s release was delayed over a year. The group desperately tried to pitch it around to see if anyone would be interested in releasing it, and heard nothing in return. Finally, Henderson and crew turned to one of their friends, Mark Kaiser. Kaiser was formally in the hometown punk quartet Mayyors, which had a zealous following that included Henderson and Liles when they were younger. Liles was even in the Mayyors for a short period of time. Now, Kaiser currently runs his own indie label-Mt. St. Mtn.
This past August, G. Green released their latest album, Area Codes. Guitarist Mike Morales and bassist Simi Sohota joined Henderson and Liles a little over three years ago when Feerick and Meyer decided to leave the band. With the understanding that the group wasn’t really locked in and as the release of Crap Culture approached, Henderson and Liles were wanting to become more serious with G. Green. They looked for others that would be on the same page as them. Morales and Sohota were down for the challenge, and started touring with Henderson and Liles.
Area Codes, also released by Mt. St. Mtn, features a more focused, better seasoned band than what’s heard on the first album. Produced by Chris Woodhouse (also formally from Mayyors), the band’s newest opus also highlights a more unified bunch. In Area Codes, Henderson and the rest of the group collaborated on the lyrics. You also get some of the original howling vocals Henderson is famous, but they’re now time tested. G. Green still pushes the boundaries with their punk angst and lawful unruliness as they dive into the topics of bad sex, drugs, heartbreak, and the overall frustrations of life.
“For what I can recall with the recording of Crap Culture, it was pretty haphazard. I had all these songs that I written, and we knew how they went. But, we couldn’t put it into words what we wanted it to sound like,” Henderson explains when asked what he thinks the differences are between albums. “With the new album, we took the time with this set of songs to hone them and find the sound.”
The opportunity of working with Woodhouse was sought after before Area Codes, according to Henderson.
“We knew we had the best material, and we wanted to make a good document of that. What Woodhouse is the best at doing is capturing what you sound like live, and very well” Henderson said. “That’s what we do best. We played these all of these songs a million times on the road, and it seemed like the best idea to have Woodhouse document that.”
As the band continues to get ready for more touring, and prepping for another album (hopefully being released next year), Henderson mentions the band’s 2012 release of Crap Culture has become a distant memory.
“I haven’t listened to it in the past two to three years,” Henderson revealed. “We haven’t played anything from that album in the last two, three years.”
(Listen to G. Green here: http://cultofggreen.bandcamp.com/.)