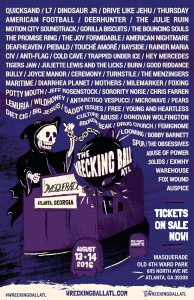 Last year’s inaugural The Wrecking Ball ATL, which took place at Masquerade in Atlanta, Georgia, was a virtual who’s who of punk, emo, indie and hardcore heavyweights and up-and-comers from across those genres. Although it seemed impossible for the organizers to one-up a lineup that featured bands like Knapsack, American Nightmare, Beach Slang and Descendents, they’ve done exactly that with the sophomore installment, featuring 60 artists across five stage, and reunions and rare appearances from L7, American Football, Thursday, the Promise Ring and more.
Although there isn’t a single artist on the lineup that we aren’t happy to see, which is creating some big issues putting our daily schedules together, there are five artists that we just can’t miss. Here’s a little preview of those acts.

Drive Like Jehu, Saturday, August 13 at 8:45 pm on the Park North Stage
San Diego’s Drive Like Jehu, who were originally active from 1990 to 1995, was formed by guitarists Rick Froberg and John Reis and included bassist Mike Kennedy and drummer Mark Trombino, characterized by interlocking guitar play and elliptical melodies, the band produced a distinctive post-hardcore sound that continues to impact modern, hardcore, punk and emo. Also of note, Trombino was the producer and audio engineer behind genre defining records by Jimmy Eat World, Rocket from the Crypt (which featured Reis), Boy’s Life, Knapsack, Blink-182, Mineral and more.

Hey Mercedes, Saturday, August 13 at 5:25 pm on the Heaven Stage
Following the dissolution of Braid in 2000, Braid’s Bob Nanna, Todd Bell and Damon Atkinson enlisted guitarist Mark Dawursk and recorded and released a handful of EPs and LPs as Hey Mercedes.  The band played their final show in April 2005. Then earlier this year they announced they’d be reissuing their debut, Everynight Fire Works (originally released in 2001 via Vagrant Records), via Run For Cover Records and embarking on a Summer U.S. tour in support of it. We’re keeping our fingers crossed that they work their When In Rome and Guided By Voices covers into the set.

Motion City Soundtrack, Sunday, August 14 at 5:45 on the Park North Stage
Formed in Minneapolis in 1997, perhaps no other punk- and emo-leaning band has had a better run than Motion City Soundtrack.  They’ve produced records for lauded punk labels like Epitaph, who they signed with in 2003, they’ve flirted with majors (releasing My Dinosaur Life via Columbia), they’ve toured the world, and they’ve garned a voracious fanbase with their smart, and identifiable take on heartfelt rock.  Sadly, The Wrecking Ball will host their farewell performance and we’re anticipating a few tears amidst the high-fives and sing-alongs.

The Promise Ring, Sunday, August 14 at 3:20 on the Park South Stage
Milwaukee emo forefathers The Promise Ring, who formed in ’95 and split around ’02, reunite for a rare performance, which is sure to be chock full of hits from across their four LP discography. Formed by Cap’n Jazz’s Davey von Bohlen, guitarist Jason Gnewikow, of None Left Standing, and drummer Dan Didier of Ceilishrine, the band’s sophomore LP, Nothing Fells Good, found the band graduating from basement shows to larger and larger followings and later albums even yielded a music video or two for MTV.  As an aside, von Bohlen and Didier’s Maritime are also playing the event.

Quicksand, Sunday, August 14 at 8:45 on the Park South Stage
Founded in 1990, the New York City post-hardcore band launched the sound into the major label realm with two albums, Slip and Manic Compression, via Polydor and Island respectively. The band toured with everyone from Rage Against the Machine, to peers like Helmet and Fugazi, to metal bands like Anthrax and White Zombie, and even punks The Offspring. Although the band succumbed to internal conflicts and stresses related to constant touring and broke up at the height of their success in 1995, they managed to chart in the Billboard 200 and in the number 9 position of the Billboard Heatseekers chart before calling it a day. Following the split, Walter Schreifels started Rival Schools, Tom Capone joined Handsome, and Alan Cage joined Seaweed.
For more information, visit WreckingBallATL.com.