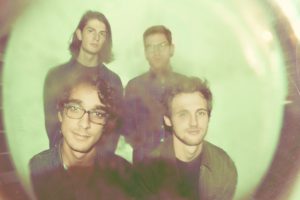 Infinity Girl’s new LP, Harm, is rooted in shoegaze — but is less “wall of sound” and more “fuzzy dream pop” and is definitely sure to capture the ears and hearts of fans of The Pains of Being Pure at Heart, Yuck, The Swirlies or The Pixies.
Forged in the crucible of the Boston underground and now based in Brooklyn, Infinity Girl emerged in 2012 with its debut full length, Stop Being On My Side, a set that was equal parts haunting melody and ear-bleeding power. An EP, Just Like Lovers, followed in late 2012 and again propounded Infinity Girl’s refreshing proclivity for bending classic song forms toward its will to experiment. More recently the band has taken its music to a darker and more dynamic place informed by both classic post-punk sounds and an increasingly formidable ability to meld noise and hooks in exciting, surprising ways.
Ghettoblaster recently caught up with the band to discuss their sound, the LP and their loftiest goals with singer/guitarist Nolan Eley. This is what he told us.
Do all the members of Infinity Girl share pretty similar influences?  Are they rooted in post punk and the ’90s shoegaze and fuzz pop sound?
I think there is a lot of crossover between our influences and interests, a lot of the typical college rock you’d expect but we also all love hip-hop and some experimental classical and “world” music even though we’d shudder at that term.
When did you guys make the move from Boston to Brooklyn?  Was that a career move?
We all made the move individually over the course of 2013 as it was a good move for us individually, but we were all happy to be able to continue the band. The band was definitely at least in the back of our minds when we were deciding to move to Brooklyn.
What do you miss most about being a part of the Boston scene?  Would do you like best about Brooklyn?
I think I miss the camaraderie in Boston. Because the scene was smaller it was a little more tight-knit. Though Brooklyn is amazing because you’re constantly surprised by so many amazing bands, it really makes you want to better yourself.
How did you get hooked up with Topshelf?
After we finished our album (Harm) we sent it to them not really expecting a reply, but they got back pretty quickly and had really amazing things to say about the album. We tried to play it cool but we were really excited and it’s been great being a part of the label so far, we’re very stoked to keep working with them.
When did you begin writing Harm and what were you hoping to accomplish with the record?
Other than a few outliers, Harm was mostly written in September/October 2013, right after I moved to New York. We knew we wanted to move in a new direction and that direction happened to be very stripped down and raw. We’re pretty happy with what we accomplished, it being a consistent and cohesive record.
Who engineered the record and what did they bring to the table?
Our friend James Krivchenia engineered. We had lots of talks with him about it and I couldn’t be more happy with the results.
Are there moments on the record that you are most personally proud of?  What are they?
My favorite moments on the record are the songs that Kyle wrote. I wish I could write songs like him.
What are your plans for touring in support of the record?
We are currently booking a tour for around two weeks in mid-November. It’s coming together nicely so hopefully we’ll announce some details soon!
What are your loftiest goals for the band?
We just wanna keep putting out records and make them as good as possible. If I get to date Taylor Swift along the way, I won’t be upset.
(Infinity Girl will play a series of shows next month in support of the new LP.
Wed Sep 02 Shea Stadium Brooklyn, NY, US Tickets
Sat Sep 05 Great Scott Allston, MA, US Tickets
Sun Sep 27 Palisades Brooklyn, NY, US Tickets
Infinity Girl is streaming its new LP, Harm, on Billboard.
Visit them here:
Facebook
Twitter
Bandcamp
Instagram
Topshelf Records)