The People’s Temple, Mondo Drag, Outer Minds, Sisters of Your Sunshine Vapor, Heaven’s Gateway Drugs, The Harlequins, Children of the Emerald Fire, Ohio Knife, The Tongue and Lips at Cincy Psych Fest – Saturday, October 20 at Mayday in Cincinnati, OH
By Tracey & David C. Obenour
Before we even piled into the car to make that short trip from Dayton down I-75, I knew that the first annual Cincy Psych Fest had a lot of potential to be incredibly awesome. Psych rock – in its many incarnations – is pretty agreeable by me. Add in the venue Mayday’s specialties on whiskey, craft beer and gourmet sausage, plus outside vendor Eli’s Barbeque… well, those things are all pretty damn agreeable by me too. In fact, I believe that the only proper response to the pairing of psych rock, craft beer, barbecue, gourmet sausage and whiskey, is an enthusiastic “shit yeah!” 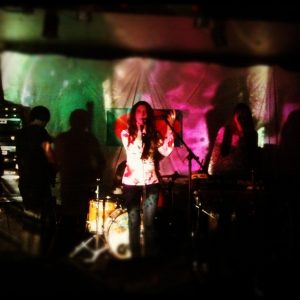 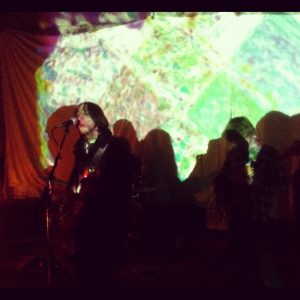 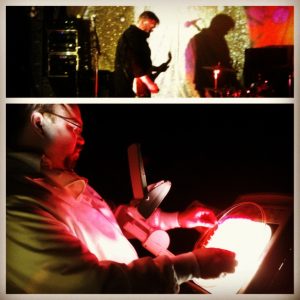 THE MUSIC
The main surprise of the night came from Cincinnati’s own The Harlequins, Children of the Emerald Fire and Ohio Knife, who each showed up the out of town acts. Ohio Knife had a sort of a Queens of the Stoneage thing going on with a lot of sound and spirit coming from just two guys. Though it may sound like a slight, Children of the Emerald Fire felt somewhat like a 70s novelty act. The sound was definitely a throwback to the Jefferson Airplane-era, and the thrift store threads probably helped to reinforce this, but they were a lot of fun and the lead guitarist could definitely shred. The best set of the night belonged to The Harlequins. Think latter day Lookout! releases like The Oranges Band or The Evening, but with more periods of freakout distortion. It’s always hard to get a grasp on a band your unfamiliar with based just on one live performance, but those dudes were on. 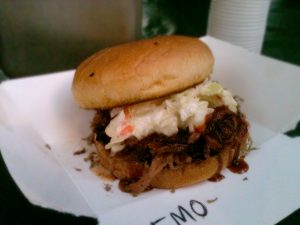 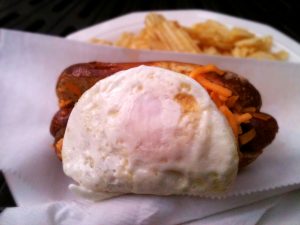 THE FOOD (courtesy of Ghettoblaster Designer, Tracey Obenour)
Mayday… with so many tempting dog options and only one night in town, it was looking to be a two dog night. My first hit was the El Ricardo, a chorizo dog with black beans, cheese and a fried egg on top (a fried egg on top magically turns any dish from “meh” to “holy shit, there’s an egg on this!”). The chorizo was good, though it could use some more spice… herb and heat-wise. The egg was cooked just right, coating everything in yoke. But the best part was the pretzel bun, fresh and salty, not the dull gluten napkin you find supporting most hotdogs and sausages. For the second dog I chose the Pig in a Blanket – a Mett with bacon and cheddar, wrapped in a crescent roll. It reminded me of its hors d’oeuvre namesake… but with bacon, win! And though I didn’t get a pulled pork sandwich from Eli’s, I tried a bite of David’s and would be amiss not to mention how completely amazing their pork was. Crispy, smoky and not drowning in bbq sauce… perfectly complimented by the coleslaw on top.
THE ATTENTION TO DETAIL
Even in it’s first year out, it was apparent that Cincy Psych Fest’s organizers had a clear vision for the event that raised it far above yet another night of bands at a bar. Mayday’s multiple rooms let sets flow easily between the two stages and offered a respite from the crowds when you wanted one. Their food would have been amazing on it’s own, but the inclusion of Elli’s Barbecue gave folks a chance to sample another Cincinnati specialty. In true psychedelic spirit, Doctor Robert’s Ocular Odyssey liquid light show engaged your senses with the added visual to the audio. All of this successfully executed at a first year event, it’s exciting to think what will happen for the second annual Cincy Psych Fest.