With the release of their second full length, Banquets have truly found their legs.  Lead singer Travis Omilian weaves his nostalgic, romanticized lyrics through the air-tight pop/punk rhythms of his band, inserting a unique sense of poetry into the scene. Quick rhythms and catchy hooks help drive home the idyllic lyricism. Self-titled introduces Banquets as a songwriting powerhouse, taking the band even further beyond the sing-along punk they have mastered and marking them as a band to watch across the music community.
Following the release of their self-titled sophomore record, Banquets is hitting the road on a string of headlining dates across the United States and Canada. The band will be joined by Nightmares For A Week on the second leg of the tour.
Ghettoblaster recently caught up Banquets guitarist Dave Frenson to discuss the state of the band, the record, beer and poutine.  This is what he said…
Have you guys been able to make the leap to full-time band yet?  If not, it difficult to balance jobs while trying to tour as much as possible?  Is that a future goal?
That’s not really a leap any of us are looking to make.  We’re all dudes with careers, rent/mortgages, and bills to pay. So as awesome as hitting the road full-time would be, it’s just not possible for us. That said, we are incredibly thankful for the time we do get to spend playing shows and the people who come out to see us. Balancing work and the band is an undertaking for sure, but if we didn’t love it, we wouldn’t do it any more. Luckily all of our jobs afford us the time off and are generally pretty supportive of our ventures.

Who were the bands from Jersey City that initially inspired you guys or offered significant encouragement when you were coming up?
Jersey City honestly didn’t provide much more than a practice space we’ve since moved out of and a place where I met our original drummer, Pete. There are bands from the area for sure, but we don’t really know most/any of them.  We’ve all been in bands for over a decade at this point, so we’ve made a lot of close friends through that.  When we were just getting our start, bands like Static Radio, Bouncing Souls, as well as Tony Fest really helped us by putting us on shows we didn’t deserve to be on.
Did you take a different approach in the recording of Self-Titled, or was the process similar to that of Top Button, Bottom Shelf?
The recording process was pretty similar this time around, but we did have a bit more time in the studio for S/T. That combined with being generally a lot more prepared made the entire experience a lot smoother. 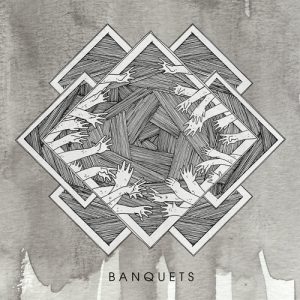 When did you begin writing the material for Self-Titled?
Some time last summer. We wrote and recorded two songs plus a cover for a split with Nightmares for a Week that never ended up coming out. We ended up giving away one of those songs for free, and re-recording the other for S/T.  I think it was that whole experience of having a release fall through that gave us the itch to really work on new stuff. We wrote and recorded 15 songs, 10 of which became S/T.

What was the most difficult song to take from the initial writing stage through recording and mixing?  Why was it so troublesome?
I’d say probably “Fade From Gold.” We struggled with picking a tempo for the beginning, because we didn’t want it to be too fast. But with the tempo change in the middle, we had to play the beginning pretty fast; otherwise the contrast wasn’t there.  We definitely wrestled with that one a bit before we settled on it.

Which of the songs on the record is most different from your original concept for the song?
Definitely “Bums in the Breeze.”  The original idea Travis and I had for this song was for it to be a very short, acoustic guitar/vocal only song. My original iphone demo for it was less than a minute long. We wanted a slow quite song to put just before “Daggers” to close the record. But when we started playing it as a band, it took on a whole new life and ended up being one of my favorite songs on the record. I think the last minute of that song is arguably the best thing we’ve ever done.

Did you have any guest musicians play or sing on the record?
This time around we decided not to have any guests. We didn’t think there was any part in particular that it would really make sense, and none of us wanted to have someone do guest vocals without a reason.

What input did Will Putney have that changed the face of the record?
When we were doing pre-production, one of the biggest things Will encouraged us to change was the tempos.  All of our demos are significantly slower than the versions that ended up on the record. In the end I think we were all really happy with that. He’s got a great ear for things like that.  He’s also got a great sense of where and how to do backing vocals that can be heard all over the record.

Is there an overarching concept behind your new album that ties the record together?
Other than these songs being the most personal and honest songs we’ve done, lyrically, there’s not really a concept or theme. That’s that reason we ended up going with a self-title. Nothing we were coming up with really fit the record, so we didn’t want to force something.

Have you begun playing these songs live and which songs have elicited the strongest reaction from your fans?
We’ve been playing a lot of the new songs live, especially since our record release in May.  I’d say the most popular songs are “Call It a Comeback” and “March 19th”.  Those songs have the biggest feel, in my opinion, and I think people just respond to them a little more than the others.
There are some very personal songs on the record.  Is it cathartic to write a song about something that is weighing heavy or has changed or defined you as a person?
This isn’t really my area since Travis is the one who wrote all the lyrics, but I can say that “The Flicker and The Flame” is a song that’s over two years old at this point, and it still hits me really hard.
Have any of Travis’ students discovered that he’s in a band?  What are their thoughts about having a rocker teacher?
I don’t know about the students at his new school, but the students at his previous job all knew he was in band. They’d all ask him about his tattoos and make him crazy cards with flaming guitars and stuff. Pretty cool.
You guys did the Steamtown Beer and Music Festival earlier this Summer. Are any of you beer connoisseur?  What are your favorite brews?
We sure did. I quit drinking like three years ago, but before I did I tended to favor darker lagers.  Mostly we’d drink Bud Light Lime, Yeungling, or Coor’s Original (Banquet Beer) at practice. I think it’s safe to say the other guys in the band can appreciate a finer beer, but generally drink whatever’s free at the show or cheapest at the bar.  We tried to get sponsored by Coor’s when we first started out, but they weren’t playing ball. They missed out on the opportunity of a lifetime.
On your current run you have a gyro place and a tattoo shop on the routing. Is anyone particularly stoked for a big greek meal or to get some work done?
Pretty much the only reason to go on tour is to eat weird local foods. I’m gonna spend the next couple weeks researching places we NEED to eat while we’re out. Obviously poutine is on the agenda, along with some wings in Buffalo.  As for getting tattooed, I wouldn’t be surprised if at least one of us walks out of that shop with something new.
(Catch Banquets on tour at one of the following dates:
AUG 01 – Somerville, MA @ Starlab
AUG 02 – Montreal, QC @ L’esco
AUG 03 – Toronto, ON @ Sneaky Dee’s
AUG 04 – Buffalo, NY @ TBA
AUG 05 – Pittsburgh, PA @ Evolver Tattoo Arts
AUG 06 – Kent, OH @ Euro Gyro
AUG 07 – Pinckney, MI @ House Show
AUG 08 – Chicago, IL @ Grind Bar
AUG 09 – Moline, IL @ Bier Stube Blackhawk Room
AUG 10 – Cincinnati, OH @ TBA w/ Nightmares For A Week
AUG 11 – Loiusville, KY @ TBA w/ Nightmares For A Week
AUG 12 – Nashville, TN @ Owl Farm w/ Nightmares For A Week
AUG 13 – Atlanta, GA @ Wonder Root w/ Nightmares For A Week
AUG 14 – Columbia SC @ TBA w/ Nightmares For A Week
AUG 15 – Chapel Hill, NC @ Local 506 w/ Nightmares For A Week
AUG 16 – Richmond, VA @ TBA w/ Nightmares For A Week
AUG 17 – New Brunswick, NJ @ Court Tavern w/ Nightmares For A Week)