For the first time in the band’s forty-year history, here is the incredible story of The Cure—virtual inventors of alternative music—from someone who was there at the very beginning. Because Robert Smith prefers to let the band’s songs speak for themselves, Cured by drummer Lol Tolhurst (Da Capo Press), is the only insider memoir of the group that’s helped generations navigate their angst-filled teen years. 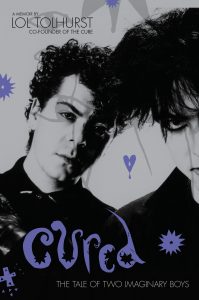 A founding “imaginary boy,” Tolhurst threads the genesis of The Cure through his adolescence with Smith, the iconic leader of the group, to their stratospheric rise as one of the most influential, critically acclaimed, and commercially successful bands of modern times. After forming in 1976, Lol and The Cure racked up an impressive number of achievements that includes selling over 27 million units worldwide and earning 40 Platinum and Gold Records in the U.S., Europe and Japan. The band’s journey to global success is woven into a story that reveals the highs and lows of the lifelong friendship between Lol and Robert, who met at age five on their first day of school together in Crawley, England, 1964.
For both diehards and the uninitiated, Cured highlights the parts of a creative trek that are not normally revealed to fans, as Lol takes readers on his personal odyssey from suburban London to the Mojave desert and across the miles of love, addiction, pain, forgiveness and redemption.
Ghettoblaster recently caught up with author and musician Laurence “Lol” Tolhurst, who continues to perform, lives in Los Angeles, to ask about his favorites of 2016. These are the books, comics, movies and records he enjoyed.
Adrian Tomine’s “Killing and Dying”
He made a really  heartfelt graphic novel. Dark and beautiful too!
Patti Smith’s “M Train”
Amazing that she could write something about her artistic process that’s so interesting as well as a book.
Daniel Clowes’ “Patience”
Psychedelic and cray cray!
The Girl On The Train
Atmospheric and beautifully acted
Suicide Squad
Gotta love DC comics! The  mystical overtones blend well with the action.
David Bowie’s Blackstar
As a last artist statement its very cool.
(Visit Lol Tolhurst here: https://www.facebook.com/officialloltolhurst.)