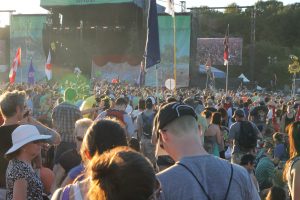 For the first time I wasn’t able to make it though the masses to get to the photo pit entrance. I pride myself on being able move through a crowd – I haven’t been waitressing for 30 years for nothing. I had to settle for seeing The Lumineers with the rest of their fans. The roots folk band drew a large crowd; so large that the band stopped in the middle of their set to proclaim it the largest they’ve ever played for. The crowd love was well deserved. I’ve heard them described as a Mumford and Sons tribute band, but they have a rousing folk sound of their own.
I took the next hour to properly wander through the Art Market, Austin Eats area, and Farmer’s Market. The food is all from local venders and there are healthier choices in the farmer’s market stand. I actually purchased a dress from one of the art merchants, every shop features handmade items. There is even a branch of US Post Office so you can mail your purchases and not schlep them though the mud.
I gave myself plenty of time to get to the Avett Brothers stage. I first saw them play on the back porch of a restaurant in Indianapolis in 2005 and have been smitten ever since. The band a matured since then, but they haven’t lost their enthusiasm and charm.  They drew a big crowd at the festival despite competing with Iggy & The Stooges playing at the other end of the park. The Avett Brothers have made bluegrass-tinged pop cool, as evidences by the thousands of 20-somethings singing along and dancing. 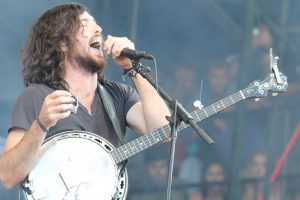 The first two nights of the festival featured two bands playing at the same time closing down the show – Friday featured AVICCII vs. The Black Keys, Saturday pitted Jack White vs. Neil Young and Crazy Horse. The last night of the festival ends with one band – this year the headliners were Red Hot Chili Peppers and I was lucky enough to be invited as one of the photographers to shoot the show.
While it’s well deserved, I’m blown away by the staying power and popularity of the band. At the risk of showing my age, my first RHCP concert was at the now defunct venue, the Patio in Indianapolis in 1985. There are several grainy YouTube videos of the show (yes, there was video back in the day). I was in college then and I remember finishing my waitressing shift, driving the hour it took to get from Purdue to Indianapolis, changing out of my polyester uniform in the car, and spending my tip money on the cover charge and two beers. It was a crazy show. The band was all over the stage and in various stages of dress – there were tube socks involved, if you know what I mean.
Anyway, in the past 27 years I’ve seen them in increasingly larger venues to arena stages. If anything the remaining band members – Anthony Kiedis and Flea – are in better shape now. Drummer Chad Smith joined the band in 1989; guitar player Josh Klinghoffer has been part of the lineup since 2009. For the record Klinghoffer was six-years old the first time I saw the Chili Peppers. 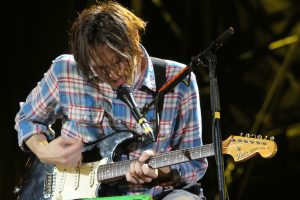 There were teenagers in the ACLF crowd that had been in the front row since 11:00 that morning that hadn’t been born when the band formed. The Red Hot Chili Peppers arrived on stage to thousands of fists pumping and screaming fans, and they started out with the energy to match the crowd.
They started with “Dani California” and played with an intensity reserved for younger men. Ironically Klinghoffer is nursing a broken foot and played a good part of the show from a chair, but couldn’t help jumping up and joining the fray several times.
The band ran through several of their hits, “Otherside,” “Suck My Kiss,” “Tell Me Baby,” “Under the Bridge,” By the Way,” and “Give it Away” during their two-hour set. I can’t imagine that everyone didn’t have a great time. I know I did. 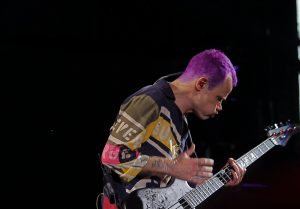 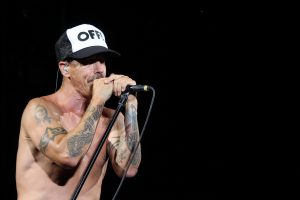 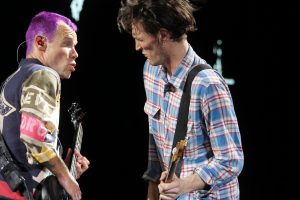 Another fabulous Austin City Limits Fest in the books. Next year’s version will expand to two weekends, October 4 – 6, and October 11 – 13.