(Editor’s Note: The lovely Nora Spitznogle visited the Austin City Limits Festival 2012 and has provided recaps of all the action.  Here’s what she saw/heard on day two…)
Austin City Limits Fest 2012 – Day Two
I had a chance to meet up with 80% of the Wheeler Brothers (brother Nolan was home resting his voice) the day before their Austin City Limits debut. As Austin natives, they told me they’ve dreamed of playing the festival since they were kids. South by Southwest in March was nuts and set the pace for our summer tour.” They were happy to be playing in their hometown and able to sleep in their own beds after months on the road.
The band is made up of three brothers, Nolan, Tyler, and Patrick. Fellow Austinites Danny Matthews and A.J. Molyneaux round out the group. The brothers Wheeler didn’t play music until Tyler won a guitar in a shoe store raffle drawing when they were young. Tyler said that he “crunched up the ticket so it would get picked. I knew that I was going to win.” One guitar and three boys was not a good combination, and their father wound up smashing the guitar to squash any further arguments. The boys ultimately worked it out by choosing different instruments.
I asked if the brotherly smack-downs continue on tour. Patrick told me “Nolan has a safety net as the singer because you can’t punch him in the mouth, and we realize that we all need to be in good shape to tour.” For all of the fisticuff talk the guys are entertaining and charming and they clearly enjoy each other.
That camaraderie was clear during their set; their infectious stage presence had me bopping along in the photo pit (even thought it is not so cool to dance in the pit). Their sound is Americana-rock at it’s most fun– there is hope even in the melancholy. 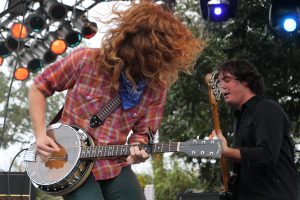 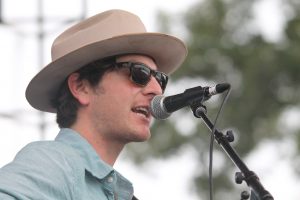 Next on my dance card was Rufus Wainwright. He took the stage in a make-you-dizzy-if- you-look-it-too-long suit that was just right for him. His set was typically mellow, with generous shout-outs to his sister, Martha’s new record and an upcoming film about his late mother, Kate McGarrigle. His set was a lovely afternoon respite to the surrounding power bands. 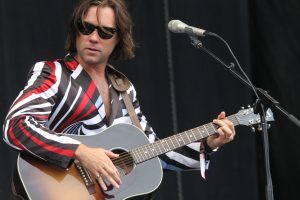 I had no idea what to expect from Oberhofer. Front man Brad, you guessed it, Oberhofer lead the band with raucous twenty-something enthusiasm.  The set was full of solid indie-rock songs, although I must admit that my attention was diverted from the music by trying to figure out what the heck was on his earring….Mr. T? WWF? 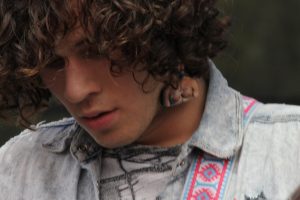 I went to see Father John Misty based on the recommendation of the Wheeler Brothers and man, am I glad I did. Joshua Tillman (former Fleet Foxes drummer) is an indie-heartthrob. On “Only Son of a Ladies Man” he strutted and sashayed in a way that made me blush. And want more. For all of his stage swagger there was an underlying layer of not taking himself too seriously. On the other hand he does take the music seriously. The set was a tight mix of folkish-country, rock, and a little bit of jam. 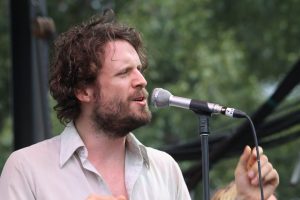 The crowd at the Andrew Bird show was ready to chill. Bird was playing on the Bud Light Stage, the largest of the festival, but he made it surprisingly intimate when he played the first few songs solo. The beginning of his set was a delightful mix of violin and whistling, creating a beautiful melody – a little dreamy, really. When his band joined the stage the pace picked up a bit and crowd bopped along.
The Punch Brothers are full of power-bluegrass goodness. I was looking forward to seeing their show and I wasn’t disappointed and neither was the surprising young crowd. 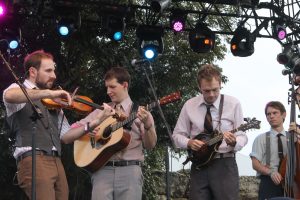 And then came the rain. It rained and rained and rained some more. There were 75,000 very soggy people and I was one of the folks sliding through the mud to get from stage to stage.
I was really looking forward to hearing Steve Earle, I’m a huge fan to the point of I’m not sure that they should have let me in the photo pit within touching distance of the man himself. Unfortunately the sound bleeding from the aptly named electronic superstar, Bassnectar stage made it a tough to hear Earle. He put on a well-crafted show, but I was super-distracted by the thumping sound over my shoulder. 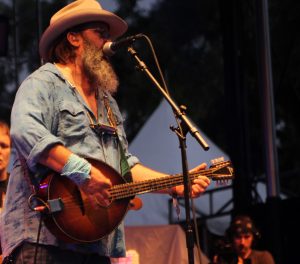 At this point my clothes were soaked two layers though and the heat hadn’t relented. I had to make the choice of hearing Jack White or Neil Young, playing at opposite ends of the park. I chose Young for a couple of reasons, mostly practical, deciding that most of the photographers would be in the pits for White. I didn’t choose well. Young tested my patience with his 15-minute opening song, “Love and Only Love.” I’m not a fan of jam bands and I forgot that Young and Crazy Horse are the godfathers of epic jams. Fans of that type of music were not disappointed; listeners that wanted to hear his hits went home empty handed.

All and all another great day of music at the Austin City Limits Fest. The rain didn’t seem to dampen the enthusiasm of the crowd.