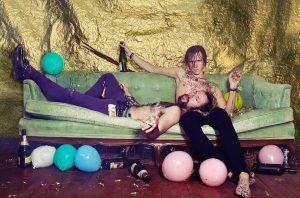 By Tommy Johnson
It’s an off day on for the duo of Cadaver Dogs. Mat Franklin and Lex Vegas, who make up the band, are currently on the road and they are in their second day in Milwaukee. Just the previous night, Franklin and Vegas performed at one of the local neighborhood bars in town. When the show ended, the band hung around with the bartenders, the door guy, the sound engineer, and some of their friends for a little after party. For most bands, the after party would be low-key. Have a few drinks. Relax a little.
Cadaver Dogs aren’t one of those bands.
They are far from it.
“Everybody lost their minds. We were doing shots, people were taking their clothes off. It was one of the better after parties on this tour”, Vegas explains.
It’s nothing new for Cadaver Dogs. Vegas and Franklin have been running wild together for the past twenty plus years when they first met. Throughout the years, they attended the same school and college together. During their college years, they were in a five-piece band called Look Afraid.
When Look Afraid started to wind down, Cadaver Dogs began to bring their raucous partying ways and hard-hitting music to the Columbus, Ohio scene.  This past winter, the bassist left the band to pursue other ventures.
“It was really amicable with our bass player leaving. He was going off to do other life things, and we talked about whenever we were going to find a replacement or just figure how to be awesome on our own”, Vegas explains. “We went with the latter.”
Their newest album released digitally in June, Too Much, is a blistering onslaught of rock and roll the way it should be. Along with bruising guitar riffs, piercing hooks, thunderous drums that all come together-the band’s music is simply dripping with unapologetic intentions. The band’s music isn’t for the weak, so you better be ready for a rush of recklessness and carnage with each song on the album. Too Much is a terrific follow up to their previous album, the 2012 release super loose.
With the release of Too Much, Mind over Matter Records released a limited edition clear square seven-inch records of the single “Get Out!”.
“The seven-inches were actually totally the label’s idea, we just worked with them to get the final design exactly right. We were playing a big record release show with Foxy Shazam, Larry and His Flask at one of our favorite venues and we knew we wouldn’t have the full LPs done so we wanted to have something special just for that night. MOM only made 40 of them, all hand-screened and numbered and absolutely amazing, and we sold out almost immediately,” Vegas explains.
Cadaver Dogs already have some wild plans for the physical release of Too Much.
“Multiple layers and textures and sleeves…the vinyl itself is going to be three different beautiful colors. We’re also discussing doing a few more interesting singles like that one (the 7” release of “Get Out!”).”
For those who attend a Cadaver Dogs show, you better be ready to experience a set that is like no other. Expect sweat being splashed all over the place. Believe that you will witnessing the duo throwing themselves all over the stage area. Most importantly-anticipate full pandemonium. Just the way Cadaver Dogs like it.
“I want people to be in on the party and right there, sweating and rolling on the ground with us,” Vegas proclaims.
Cadaver Dogs plan on wrapping up their current tour at the end of August when they play at the inaugural Fashion Meets Music Festival alongside Cold War Kids in their home city of Columbus. They recently signed with Atomic Music Group, and plan on setting up dates that will fill up the rest of the year. For this day in Milwaukee however, the boys plan on taking full advantage of the day off. However, things could change according to Franklin.
“We could go to a bar and perform at an impromptu show. It happens often.”
If there is a party-Cadaver Dogs will find it.
(To hear more, visit the band’s website: http://www.cadaverfuckingdogs.com/.)