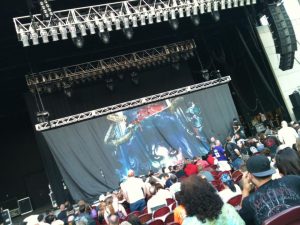 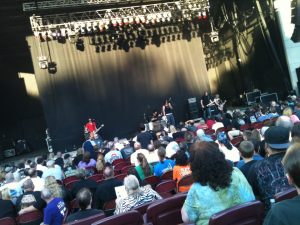 Opening up for a bona fide legend’s no easy task. It isn’t made any easier either when there’s no indication that you’re going to be playing from the venue’s site either. So throughout the starting moments of Vernez’s first song, there was plenty of murmurings of “That’s not Alice Cooper’s band is it?” “There’s an opener tonight?” and “Is that Andy Dick to the side of the stage totally jamming out to this?” Correct on all accounts! Yeah, you read right. Andy Dick was in Dayton, Ohio and did seem to be thoroughly enjoying Vernez’s solid set of alternative radio meets classic rock radio. The rest of the audience seemed generally appreciative as well as the Los Angeles five-piece did their best rock n’ roll posing and aping in the still bright early summer evening at a bandshell in the middle of a suburban park. Not the ideal setting, which would probably be more of a biker bar or Scion-sponsored festival, but the dudes made due. 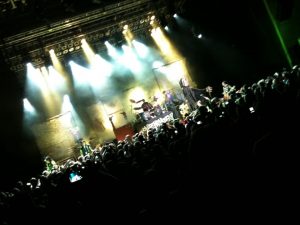 Out goes Vernez’s amps and kit, down goes the sun and up goes the banner of Alice clawing his way out of something-or-another. It’s time to witness some good ol’ theatric rock at its finest! What followed is exactly what you’d expect, a solid set list comprised of surprisingly good new songs (like the killer – pun intended – opener, “Spider”) amidst the hits that everyone’s learned by their own dark heart (“No More Mr. Nice Guy,” “School’s Out,” “I’m Eighteen,” “Only Women Bleed,” “Feed My Frankenstein,” etc etc). The man-sized Frankenstein puppet, guillotine and over 10 Alice jacket changes (I lost count) were all great – the only skit that fell flat was the reoccurring pesky paparazzi, who ended up getting skewered by Alice towards the end of the show. Really? That’s the “bad guy” you want us to cast all of our angers at? In this day and age of terrorism and corrupt and greedy politicians and bankers you pick somebody who bothers celebrities by taking their picture? I’m sorry, I’m sure it’s an inconvenience (though I’m not sure they’re clamoring for shots of you anymore, Alice) but who cares? I digress, minus this one odd misstep it was a great show. Hail, hail rock and roll!
(Associate Web Editor’s note: Mr. Obenour failed to mention one essential detail of the show…the unidentified person who continuously brought their own unrelenting string of “silent, but deadly” hits to the seated section.  You haven’t experienced Alice Cooper until you’ve seen his performance in smell-o-vision…)