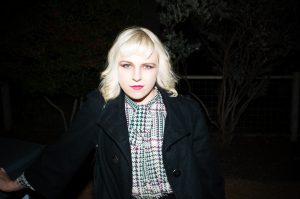 Name & Position: Devaki Knowles, contributing photographer
Best Album:
Grimes Visions 4AD Records
This album was in constant rotation throughout the year.  Every track on this album feels like it could have been released as a Billboard Top Ten single.  Grimes’ sound is a perfect combination of ethereal psychedelic electronic atmospherics and then ground into a stew of Paul Abdul-meets-Jimmy Jam pop.
Best New Band:
Friends
http://afriendzone.com
This Brooklyn based act has a sexy disco sound that is infectious.  One of the better live acts I had the pleasure of seeing.
Best Underappreciated Album:
Single Lash Almost Breathing Self-released
http://singlelash.bandcamp.com
I feel like the term “shoegaze” is overused to describe current bands but this Austin, TX based act captures the essence of the salad days of Creation Records.  Throw in a dash of ‘80s Bat Cave styling, and a pinch of Sisters of Mercy, creating a recipe of sound that I predict will make quite a stir in 2013.
Best Reissue:
The Weeknd Trilogy Republic LP
That track “The Morning” made quite an impression when I first heard it when I downloaded “House of Balloons.”  I love the physical release of this record but I miss some of the production panache that Jeremy Rose added to the original release.
Best Live Band:
Silver Apples
Silver Apples is hands down one of my favorite bands of all time.  I had the pleasure of seeing Simeon lead the crowd into a fantastical psychedelic New Year’s celebration as he performed a New Year’s Eve Show at the Dragon’s Den in New Orleans.  I saw him at 12:30 in the morning, a witching hour of magical ambience nestled in the bosom of one of my favorite cities.
Favorite Photoshoot:
Agent Ribbons
http://agentribbons.com
I love it when I get an opportunity to work with friends and family and working with Agent Ribbons was no exception.  I love Natalie and Lauren’s aesthetic and any chance to collaborate on a creative project with strong female artists is the best.  We did several shoots this year, adding incredible memories to a very busy year of working with artists that I respect and love.
Best Movie/TV show:
“Moonrise Kingdom” directed by Wes Anderson
A masterfully directed, beautiful tale mixing the best visual aspects of Anderson’s whimsy along with odes to the infectious French pop of the past.