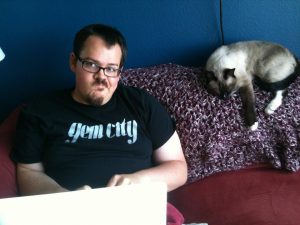 Name & Position: David C. Obenour, editor & co-publisher
Best Album: Orange Goblin’s Red Tide Rising. Not a Guided by Voices album?! As amazing as all three of those were, the fact that I hesitated in deciding is proof enough that Red Tide Rising deserves my favorite album status (I’m well aware of my bias). Takes the best of everything they’ve ever done and does it better.
Best New Band: Hyrrokkin. Simply amazing. Think early Dischord meets jazz. “But you don’t have to take my word for it” go name-your-price and download their cassette-only release at http://hyrrokkin.bandcamp.com/album/astrionics
Best Underappreciated Album: Bassholes’ Contains Bassholes Music. It’s a real shame that this reunion album probably won’t make it out beyond those of us who knew about them the first time. Shit makes Jack White sound like Clay Aiken.
Best Live Band: Guided By Voices. As long as they’re doing reunion shows I don’t know if this will ever change for me. What other band handed me a bottle of tequila this year (two times)?
Best Live Audience: Again, Guided By Voices. Soaked in sweat and Miller Lite, without a voice and smothered in hugs, there is no room for comparisons.
Favorite Interview: Orange Goblin. Ben was great in indulging my every nerdy musing about metal and beyond. It was also great to hear that the great response they got on their US tour in 2011 was a big part of what kept them going. Go buy a ticket and raise a lighter for those you love!
Best Movie/TV show: The Colbert Report and The Daily Show getting me through another election year with some degree of sanity.
Best Book or Graphic Novel: Animal Man & Swamp Thing. Two of DC’s New 52, I’m loving this whole “Rot World” storyline. Things just keep getting worse and worse for our heroes of the Red and Green, making you wonder how and when will they ever get better. They have to get better, right? Of course, it’s hard not to be great when you’ve got the amazing team of Lemire (Animal Man) and Snider (Swamp Thing) weaving stories in and out of each others worlds.
Best Game: Hot Rod Creeps by Cryptozoic Entertainment. The shenanigans of Mario Kart meets the track layout of Hot Wheels meets the deranged art of Adult Swim. Plus it’s a board game, so drinking and driving is a great idea for once!
Biggest Surprise (Good): The Afghan Whigs at Bogarts. A friend bought me a ticket for this one, which is great because I was hm-ing and haw-ing and probably would have just missed out after it was announced sold-out in only a few days. Never saw them the first time around, but it’s hard to imagine anything being better then that night at Bogarts.
Biggest Surprise (Bad): Black Bananas at Nelsonville Music Festival. This bad surprise has nothing to do with NMF itself – as it’s an amazing festival – but damn, Black Bananas live was a train wreck. Not sure if the discordant mess was a result of bad drugs or bad judgment, but either way I think I’ll just stick with the record.