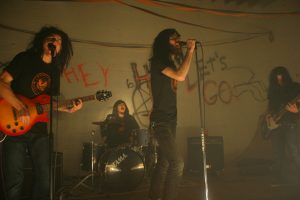 “Just pretending to be in the Ramones I felt cooler than I ever have in Black Flag, Descendents, or All.”

I’m sitting behind my drumset on Halloween night on a stage that also doubles as a skate ramp. I can hear the crowd cheering, but I can’t really see them. There are spotlights glaring in my face, and I’m pretty sure the same is true for the rest of my band. We’re going to start our set any second now and I can hear Andrew, who’s on guitar, affirm that everything’s OK on his end. We’re greenlit and ready to go and all I can think of are Bill Stevenson’s words.
“This is going to be fun,” I keep repeating to myself like some Orwellian doctrinal entity. I’m hoping it’ll work. I’m hoping I’ll be convinced.

Like they always do in these situations, my hands are getting sweaty. Not good. And, as I hear Ryan yell out “One-Two-Three-Four!” I grip my drumsticks as tight as I can, hold my breath, and pray to whatever celestial being will listen:
“Dear God, don’t let these sticks fly out of my hands…”
How did I get here? If anyone were to tell me a year ago that I was going to play in a Ramones cover band on Halloween, I’d politely give them directions to the nearest mental institution. 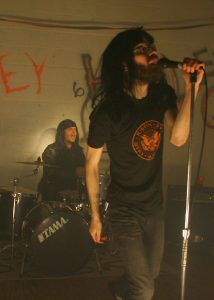 You better shut it up.

Truth be told, the idea first manifested as far back as May in a dark and smoky bar in Harrisburg, Pennsylvania. I remember being with Justin talking about music (which is what we usually do), surrounded by new people and talking about cover bands. I can’t remember whose idea it was to cover the Ramones (it might have been the Yuengling lager), but we both committed immediately. We dissect the idea: we will call the band Halloweenage Lobotomy, and there is a Halloween party in October in Philly that Justin is hosting that we would play. He then points to a skinny, tall, and admittedly handsome fellow (it could have been the Yuengling) and says, “Andrew can play guitar!”
I hadn’t met Andrew previously but his immediate enthusiasm, his inherent knowledge of the Big Apple’s Fab Four, and the assurance that, musically at least, he’s in tune made him a synch. Who would play bass?
‘We’ll figure it out, don’t worry!’ says Justin.
I get to know Andrew as the night goes on and I like the guy…substantially. “This is going to be fun,” I assure myself. However, I should have known there might be a glitch in this Matrix when Andrew and Justin both give me the same exact answer to the question, “When are we going to practice?”
“We’ll figure it out, don’t worry!”
Huh? Days, weeks, months go by, and to my disappointment (and in spite of my heavy persistence), Halloweenage Lobotomy has not developed from its embryonic state at the bar with Justin and Andrew.
Then, in mid-October I get an event invite on Facebook for a Halloween show here in Harrisburg at a friend of ours’ venue called Colormake. I look under the heading:
“Featuring Halloweenage Lobotomy” 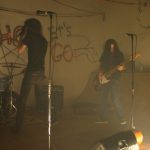 What the fuck?! The first thought going through my head is “This isn’t real.” No such luck. A couple of texts verify my fears: there’s a Halloween show two weeks away, we’re playing, there’s people showing up to see us, and we haven’t even practiced once! With no time to spare I decide to take charge, convince a new acquaintance Ryan to play bass, and try to find us a practice space. Slowly, Andrew commits, then Ryan. Unfortunately, Justin has fallen off the face of the earth and in between jokes that he might have either disappeared, died, or turned into a werewolf (the man sports a beard fit for the halls of Valhalla, after all), it becomes apparent that the band isn’t happening…until I get a text message from my Lycan friend six days before the show:
“Practice tomorrow at 1”
The final piece of the puzzle has fallen into place, and like some tragic cosmic wheel made of irony and regret, our practice space is going to be the very same venue that’s hosting the show. 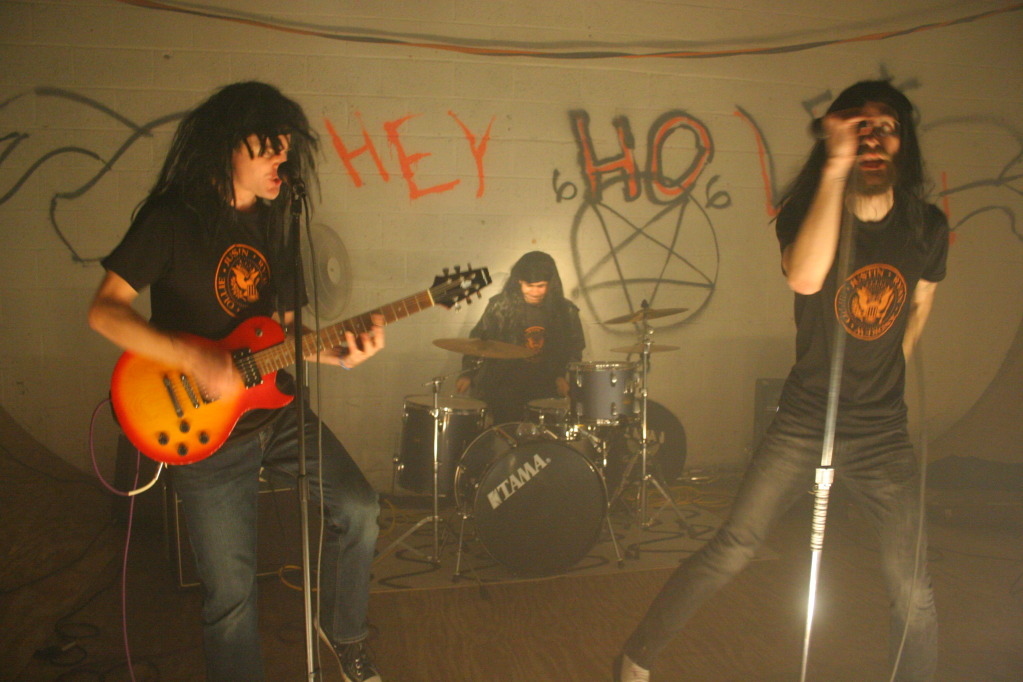 There's no stoppin' the cretins from hoppin'.

“It started as just a joke, but became quite a serious undertaking. We ended up practicing ruthlessly trying to get the stuff to sound “just so” (Ramones, i.e. perfect).”

I show up to the first practice on a sunny Sunday with a six-pack of Yuengling. What’s the plan? Well over the next three days (!) we’re to pick a setlist, practice it, and have a rehearsal show at Justin’s Philadelphia party (that I had all but forgotten about). This party in Philadelphia will serve as a dress rehearsal. The day after, we’re to drive from Philly back to Harrisburg and play the Colormake Halloween show. The show.
Don’t let anyone fool you, playing the Ramones ain’t easy, and on that very same Sunday, it becomes apparent that I’m the only one who’ even remotely prepared (as I’ve been practicing the songs sporadically over the past couple months). We can’t even play a single song all the way through, and I curse the fact that I brought Yuengling to our practice. We have three more days to get it right, and I’m starting to get nervous. On Monday we make it through a couple songs and finalize a setlist. On Tuesday we make it through a couple more and decide to add a cover of “Monster Mash” at the end. On Wednesday we make it though the entire setlist… sloppily… ONCE… and, much to my amazement, call it a night. We can’t practice Thursday due to everyone else’s commitments, and the next time we’re playing together is at the Philadelphia party on Friday; the “dress rehearsal.” Justin has made us custom shirts with the Ramones emblem in orange and our names superimposed. It makes me feel a little better, but diverts little from the fact that I’m getting a bad feeling about this. Particularly when I’m packing my drums into my car and I hear Justin say:
“I’ve got a GOOD feeling about this.”
At the Philadelphia party we find out there’s a Misfits cover band playing after us.
“Curses!” I think. “We should have done the Misfits instead!”
I know that we’re not prepared for this show, and I’m right. We start the set with “Rockaway Beach” (MANDATORY opener for any Ramones cover band – no excuses!) and Andrew misses the cue halfway through and ends up playing something different. At the same time, I don’t know what the fuck Ryan has chosen to play instead of the songs we practiced. Luckily, we make it through the set, sloppily, awkwardly, but kicking and screaming.
“Well, let that be a lesson,” I say to myself. “Besides, how much better can the Misfits cover band be?”
As it turns out, the answer to my question is much better. I can’t hear their set clearly through the dark basement room, but it’s painstakingly and embarrassingly obvious that these guys are dishing out a smooth and tight set effortlessly. I must be hallucinating. It must be the Yuengling I’ve been drinking all night.
I remember being there on Halloween night playing, and thinking, “this is the coolest I’ve ever felt.”

So, here I am. Sitting behind the drumkit. In front of a hundred people. At Colormake. On the ramp. Where you came into the story. This is the one that counts.
“ONE-TWO-THREE-FOUR!!!”
I hit the crash and hope for the best.
We sound good this time. Better than I expected. Rockaway Beach is sounding better than ever.
“OK, Ollie, do everything you can to stop any mistakes from happening.”
So, I start singing the words along at the top of my lungs just in case someone in the band gets confused as to what part of the song we’re at. Much to my surprise, we don’t need it, because our playing tonight is tight, and it makes me smile. I take off my leather jacket and this time let the drums really have it; “Teenage Lobotomy.” I look around and everyone is having a good time. Ryan’s walking on the vert and keeping control, Justin’s owning the crowd, and Andrew is singing right along with me. This is what I was hoping for! “Do You Remember Rock ‘N’ Roll Radio?” People from the crowd are making their way on ‘stage’ and singing along in the microphones. It seems like they do.
The set blazes by; “Sheena is a Punk Rocker,” “The KKK Took My Baby Away,” “Do You Wanna Dance?” “Beat on the Brat,” and our own rendition of “Monster Mash.” Every beat is there, every transition is made, and every word is spot on. I can’t see the crowd, but I can hear them having a good time. It’s nothing short of a miracle. We end the set, and thank the crowd. I take off my wig immediately and go outside to get some fresh air. Everyone’s congratulating us on the set, and I’m eternally grateful to them.
Later that night, after numerous beers, many familiar faces, and countless stories with friends, I’m driving home, with my drums in the backseat of my car and my leather jacket on thinking about the show. This time I know it’s not the Yuengling. Bill was right.
It’s the coolest I’ve ever felt.
Ollie Mikse is a graduate anti-student at Penn State Hershey. When the professors aren’t looking, he does freelance writing for Ground Control Magazine, Punknews.org, and sometimes, Razorcake. In between hazy days and sleepless night, he spends his time with his band The Ottomans and his mistress Red Sound Records. Photos by Britany Ziegenhagen.