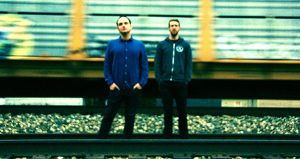 Dayton, Ohio’s power rock duo The Story Changes are gearing up for their newest EP release, Never In Daydream, which will be released on Little Heart Records on December 16. Earlier this month the band shared some songs from the record here:
UTG – http://www.underthegunreview.net/2014/11/18/premiere-the-story-changes-politics-behind-it/
Nylon Guys – http://www.nylonguysmag.com/story-changes-video-premiere/
Substream – http://substreammagazine.com/2014/12/exclusive-stream-the-story-changes-silver-lining/
“When I listen to these songs off Never In Daydream, I tend to get the same dizzy feeling in my heart that I used to get as a kid in the late 90’s, wide eyed with headphones on.  I can’t think of a better feeling to chase,” Mark McMillon, the band’s singer/guitarist said. “Everything about the writing and recording process of these new songs felt so completely honest and pure.  There were no distractions, no game plan, it all just came together quickly and the songs just felt right.
“We celebrated our 10th anniversary as a band this year and revisited some of our earliest material for a couple of special shows close to home,” McMillon added.  “Falling back in love with those old songs while feeding off the direction we took with Static and Trembling (2013 LP) all directly influenced the next sort of evolution of The Story Changes.  In a way it feels like it has all come full circle.  Back to finding beauty in the rawness.  Back to chasing that feeling.”
Today, Ghettoblaster shares the raw and beautiful “North Carolina.”  Enjoy: