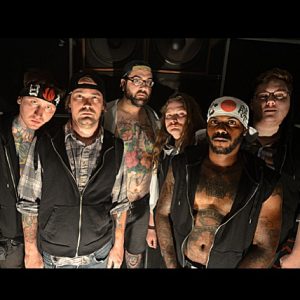 The Nightbeast are giving away their rock-oriented song, “Paid & Rowdy” at their Facebook page.  Take a minute to download it and have it forever:  https://www.facebook.com/#!/thenightbeast?sk=app_2405167945&app_data.  A video for “Paid & Rowdy” is coming in the next few weeks.  Additional information forthcoming.
It’s all but a confirmed scientific fact: It is impossible to be sad or depressed when you’re anywhere near the Nightbeast (aka Nick Testa and his band of merry musical bretheren). The wooly and bespectacled, ever-smiling Beast has firmly established himself as perhaps the definitive goofball rapper of Southern Ohio, thanks to his good-natured rhymes about Inuit sex, polar bears, being fat and hairy in the summertime and Lisa Frank (yes, THAT Lisa Frank; the one who designed your 7th grade school portfolio).
Over a year since releasing his well-received sophomore album You’re Welcome on iTunes, Nightbeast has undergone a transformation worthy of the B-grade horror films he loves so much. Before it used to be just him and an iPod and/or a sampler onstage. Now? He’s got a full band behind him laying down the jams for his trademarked Mad magazine-style raps.
2013 has been a benchmark year for “the beast”.  In addition to the new band, he’s embarked on several regional tours, released a video for “The Grown Up” (http://www.youtube.com/watch?v=kTdEK2WVdFw), and even shared the stage with party god Andrew W.K. during his recent trip to Southern, Ohio.