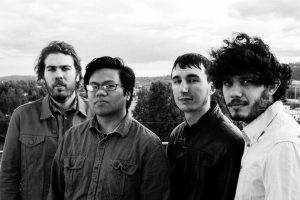 Originally from Hawaii, the Fourth Wall members Stephen Agustin, Kasey Shun, and Paul Brittain, made their way east to the Pacific Northwest, planting their music roots in Portland, Oregon where they met new drummer Max Lilien, in 2012.  The band is set to release Lovely Violence, a fine shoegazing effort whose knack for melodies would fit well on a mix with the Shins or Menomena, two bands the Fourth Wall opened for when they were in Hawaii.
The album’s songs deal with freedom, moral solitude, and the beauty and terror of an unconditional commitment.  Look for Lovely Violence on July 31 via Bug Hunt, a Portland-based art house helmed by Tyler Ferrin of Typhoon that focuses on releasing records, publishing books, and building interactive online websites.
Today Ghettoblaster has the pleasure of premiering “Live Again,” which you can enjoy below.