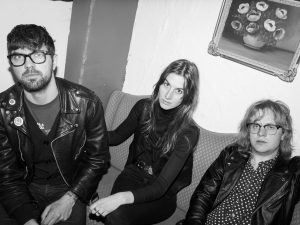 Terrible Feelings from Malmö, Sweden have existed since fall 2009.  As many great bands have, they sprung out of late parties, punk rock, pop, and friendship.  To date, the friendship has yielded three 7”s and one full length album. Perhaps you recognize them from one of their five full European tours and two U.S. tours (one on each coast), during which they’ve shared stages with Jeff the Brotherhood, White Lung, Imperial State Electric, Fucked Up, The Raveonettes, and The Babies.  On yeah, they were also handpicked by none other than Refused as support in both Europe and Sweden on their final tour.
Musically Terrible Feelings has been described as proto punk, dark power pop and gloomy surf, with a tint of both country and 70s hard rock. All descriptions are correct. It’s rock ‘n’ roll.
August 2013 will see the dawn of “Backwoods”, the band’s first release in over a year. The release features three new songs on 7” format, which will be available via Deranged Records.
Deranged and the band recently provided Ghettoblaster with a track from the 7” for your enjoyment.  Download it here: