Portland by-way-of Ohio musician Ryan Oxford creates music that is raw, optimistic in its openness on Fa Fa Fa Fired, which will be released January 27 via Mama Bird Recording Co.  Portland was the perfect place for him to have found his footing and allowed him to bring on Christian Blunda (Mean Jeans, Patsy’s Rats), Nick Dewitt (Pretty Girls Make Graves), Scott Hartlaub (Jessica Lea Mayfield) and Arjan Miranda (Black Mountain, Strand of Oaks) to bring the album to life. Fa Fa Fa Fired is full of twangy guitars, sassy backing vocals and the sweet hiss of reel-to-reel tape. In the end it’s a comforting album to lose yourself in. 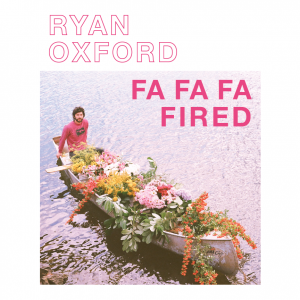 Today, Ghettoblaster has the pleasure of sharing “Flashes of Rage from the record. This is what Oxford had to say about it:
“One night I drank way too much Fireball and Jager.  Bad combo.  Then I flipped my lid in front of the bar like a little kid and accused my ex-girlfriend of god knows what.  I still feel terrible about it to this day.  The next morning was a ‘pick up the pieces’ type of morning where you bury your face in your pillow and your head fills up with shame and countless ‘I did WHAT’s?!’.  Many of the those embarrassing, blurred memories made it into this playful Phil Spector girl group inspired tune.”
Enjoy it below: