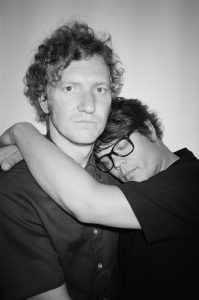 Qui has announced the October 13 release of its EP: How To Get Ideas.
Made up of vocalist/guitarist Matt Cronk and drummer/vocalist/keyboardist Paul Christensen (also of Hepa.Titus), LA-based Qui is a two-man band whose music manages to span a vast and eclectic range of styles from jazz to noise to classic rock to punk, with an air of absurdity ever-present. Known for their live antics and beloved for their iconoclasm and refusal to settle into any one scene, the pair are friends of/have played with Melvins, Marnie Stern, Sebadoh, Head Wound City, Red Fang, Retox, Gay Witch Abortion, and Zu, to name a handful. Their peculiar musical approach was enough to enlist David Yow (of The Jesus Lizard, Scratch Acid) as a past member of the band, who still collaborates with and supports them today.
How To Get Ideas was recorded and mixed at Sound Of Sirens in Sun Valley, produced by Toshi Kasai (Deaf Nephews) and Dale Crover (Deaf Nephews, Melvins), mixed by Toshi, and mastered by Pete Lyman at Infrasonic.  Dale Crover guested on vocals and percussion.
What is enticing and enigmatic about Qui’s sound is that there isn’t one, exactly– as eclectic as it is thoughtful, the band seems to teeter on the edge of beautifully composed melodies and manic cacophony with a kind of awkward grace, drawing from cabaret-inspired elements, or  classically-trained choral arrangements, or Captain Beefheart and Frank Zappa. Crooning is just as welcome on Qui’s stage as is untethered screaming, but regardless of the route taken, it all leads to the same outcome: commanding one’s attention.
To celebrate the forthcoming release, Ghettoblaster has the pleasure of premiering “Dad,” below:

Here is a tracklisting for the How To Get Ideas EP: