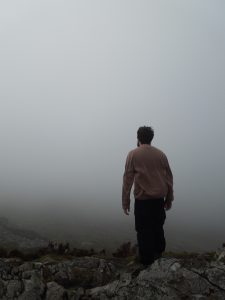 Petrels returns May 22 with thunderous new album, Flailing Tomb, to be released via Denovali Records. Taking the exhilaratingly huge sonic expanse that Petrels has become known for and pushing it further still, Flailing Tomb draws on a breathtaking sonic palette of in?uences and instrumentation to craft perhaps the strongest Petrels release to date.
Petrels is the solo project of London-based musician and illustrator, Oliver Barrett. Since releasing his debut Haeligewielle in 2011, Petrels has toured across Europe and shared a stage with the likes of Tim Hecker, FIRE!, Nate Young (Wolf Eyes), Trouble Books, Demdike Stare, Nadja, and Hans-Joachim Roedelius (Cluster). Having also collaborated with and provided remixes for artists as varied as Duane Pitre, Brassica, Talvihorros and Max Cooper, Petrels’ output is proving to be thrillingly eclectic and unpredictable.
Flailing Tomb’s underlying theme is a many-layered obsession with – and joyous celebration of – the de?ance in persisting with lost causes. Building on the mythological foundations of previous albums – Haeligewielle, Onkalo and Mima – Flailing Tomb takes an underlying current that ran beneath each of these and pushes it to the fore. Flailing Tomb draws inspiration from sources as wide-ranging as Ursula K. Le Guin’s speculative ?ction, Indian-Celtic connections, self-mummi?cation, Jude The Apostle (patron saint of lost causes), and Jean-Luc Godard’s seminal sci-? masterpiece, Alphaville (much of the second-half of the album is adapted from music originally written as an alternate score to the ?lm), weaving all this and more into six intricately-layered parts – at once forthright and ambiguous.
Ghettoblaster has the pleasure of premiering “We Are Falling Into The Heart Of The Sun” today. Enjoy the sonic goodness below.