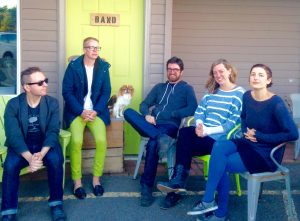 Now a full decade into its existence, Loch Lomond is a band that has shaped the musical direction of the Portland, Oregon, music scene while also constantly challenging and redefining its own sound. Anchored by the versatile vocals of singer/multi-instrumentalist Ritchie Young—who can switch from high-pitched and fragile to thundering in the turn of a single phrase—the group builds dynamic soundscapes with swells and heartbreaking minimalist breakdowns.
Though Loch Lomond has undergone a handful of lineup changes, the band remains an institution in Portland and an influence far beyond, especially after years of touring in the U.S. and Europe. Loch Lomond’s 2011 masterpiece for Tender Loving Empire, Little Me Will Start a Storm, featured mixing and production work from five of the Northwest’s most sought-after studio wizards: Adam Selzer (M. Ward), Tucker Martine (The Decemberists), Kevin Robinson (Viva Voce), Tony Lash (Elliott Smith), and Jeff Stuart Saltzman (Dolorean).
Loch Lomond’s latest album, Dresses, was released by UK label Chemikal Underground in 2013. Loch Lomond is set to release its sixth studio album, Pens from Spain, in early 2016.
Today the band celebrates their forthcoming tour dates by sharing “A String” via Ghettoblaster. The song is part of Tender Loving Empire’s annual Friends and Friends of Friends compilation.  It is a double disc set of mostly north western bands.