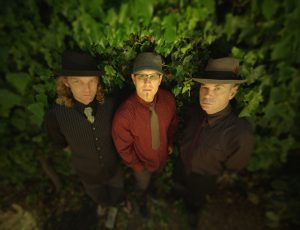 San Francisco rock band, Illogistical Resource Department release their second album, Transmission Cinema via Aphagia Records on May 19.
Bringing with them all the influence of greats like Rush, Primus, Faith No More, and Pink Floyd the album was recorded at Tranquility Base Studios in Burlingame, California and The Locker in San Francisco.  Blending elements of rock with psychedelic, and a touch of electronic,
Transmission Cinema is an intense look into the band’s songwriting capabilities. The album, which took just over a year to create, is made up of Dan Menapace (bass, vocals, samplers), Jim Harris (guitar, bouzuki), Noa Oz (drums/percussion), with guest vocalists Forest Huggins and L. Michael Wishman Jr.
Ghettoblaster has the pleasure of premiering, from the record. Enjoy below.