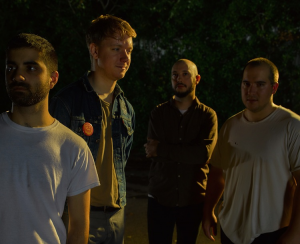 Heat Dust will be releasing their debut full-length album via dark imprint The Flenser on September 18, 2015.  This LP sees the band diving headfirst into the nihilistic depths of dark post-punk.
Heat Dust features members Clayton Hunt (guitar and vocals), Shawn Tabor (bass), Christopher Stein (drums) Jasper den Hartigh (guitar and vocals).  Heat Dust started as a three-piece back in 2011 by den Hartigh, Tabor and Hunt.  Then, the band added Stein to the fold, as he played alongside den Hartigh in hardcore bands Subservient Fuck and Bloody Mummers.
With a lineup shift and a few releases in between, the band really got to know each other as musicians.  Guitarist/vocalist Jasper den Hartigh commented, “Our earlier releases were all written in a super short period of time. When it became time to start working on this new record, we were a lot more deliberate about our songs. We had learned how to play with each other much better, and realized where our music tastes intersected. We took a long time to write, going through endless changes in structures and riffs. We wanted to be careful and truly make the best record we could.”
With this self-titled record, Heat Dust have perfected their sound; energetic and distorted post-punk with expressionist lyrical content that’s influenced by Joy Division, the Chameleons, Wire, Public Image Ltd, Gang of Four, and Killing Joke.
Following the release of the Heat Dust LP, the band will embark on a U.S. tour supporting Thou/The Body this October (dates below).  Keep up with Heat Dust on Facebook and Tumblr – more news coming soon.
Ghettoblaster has the pleasure of premiering “Nothing Left To Lose” today, which you can enjoy below.