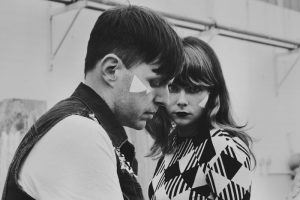 San Francisco’s Happy Fangs are an art punk duo whose ferocious presence, and raw attitude can be heard on their self-titled debut, which dropped on October 1. The duo, which consists of vocalist Rebecca Bortman and Michael Cobra (guitar/drum machine) both come from visual design backgrounds, though musically the two come from opposite ends of the spectrum. Outside of Happy Fangs, Cobra serves as the brooding front-man of electro rock band King Loses Crown, while RGB (AKA Rebecca Gone Bad) has gained notoriety as the feisty front-woman of new-wave indie dance-punks, My First Earthquake. When the duo decided to combine forces, they decided to fore-go any defined musical blueprint and only use inspiration, spontaneity and whatever backing rhythms they could produce from a Korg Electribe drum machine.
Happy Fangs will be out on a national tour (including performances at the CMJ Music Marathon in New York this October).  Before you catch them live, you can check out this feature on the band at CMJ.
Watch the video for and download the original version of “Lion Inside You” here:
http://www.cmj.com/news/video-premiere-happy-fangs-lion-inside-you/
Today, Ghettoblaster has the pleasure of premiering a remix of their single “Lion Inside You” done by fellow bay area group Return To Mono.

Visit the band here for more info on the release and their comings and goings: https://www.facebook.com/HappyFangs