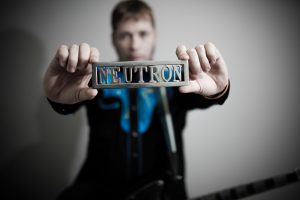 Conan Neutron is a guy, Conan Neutron & the Secret Friends is a band. It is a band featuring Dale Crover of the mighty Melvins on drums, Tony Ash of Trophy Wives and Coliseum on bass and the production skills of the iconoclastic and enigmatic Toshi Kasai. The Secret Friends bring forth a wiry and adventurous rock ‘n roll that is equal parts Cheap Trick, Fugazi, the Cars, Black Sabbath and DEVO with perhaps Mean Streets era Van Halen mixed in.
Neutron, a rock ‘n roll lifer has spent the last 15 years making records and touring in such bands as Replicator, Victory and Associates and Mount Vicious, making uncompromising, sometimes challenging and daring rock music to anybody that is interested. The Enemy of Everyone, is the first record that he wrote and arranged himself.
The record was fully fleshed out at the secret Melvins HQ – Sound of Sirens September 11-15, 2014 during a brutal heatwave. Vocals for “Fight Math” were done at Antisleep audio, Oakland, CA by Mr. Eugene Robinson (of Oxbow!) on October 8, 2014. Those were tracked by Mr. Scott Evans. Mixing was done at Sound of Sirens between October 10-15. 2014 by Toshi Kasai. 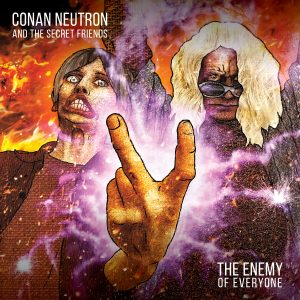 The Enemy of Everyone, which drops on March 17 via Seismic Wave, is a nine song jaunt with songs that range in theme, but largely have to do with being annoyed at things. There’s also a song about accidentally selling your soul while on a drinking bender, and whatever it is that Eugene Robinson is singing about.
Today Ghettoblaster has the pleasure of premiering “The Bargain Is Sealed, Child Of Man.” Enjoy:

There will be some shows, and with any luck much, much more to come.
(Visit the band here: facebook.com/neutronfriends.)