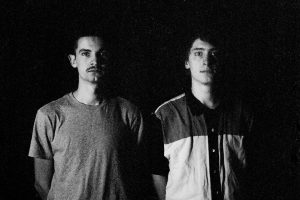 As Art Contest, guitarist Coleman Monroe and drummer Garrett Burke produce Athens, Georgia’s most spastic, high-energy, blood-spilling, rock music – a messy, indescribable genre that has been referred to as “probability and statistics rock” in the grand tradition of such indie luminaries as Battles, Ratatat, and Deerhoof. A relentless blend of organic and electronic composition, the duo’s live experience channels the volume, energy and intricacy of a ten-piece auditory assault.
Last year, the band released their debut LP, Math Major, and in the summer of 2015, they relocated from South Carolina to Athens. With Art Contest’s upcoming full-length album, Two Songs, they hope to reinvent the concept of math rock and technical music, stylistically and spiritually.
Today, Ghettoblaster has the pleasure of sharing a mathy jolt of explosive psych-pop in the vein of Battles, Animal Collective, and Tune-Yards, “Tokyo Megaplex,” which will be featured on Art Contest‘s 2016 full-length release, Two Songs (which drops via Post-Echo).