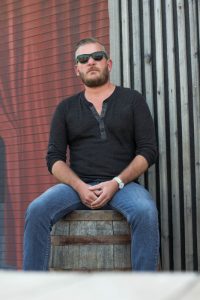 This fall the Denton, TX-based band Rodney Parker & 50 Peso Reward will be releasing their long awaited follow-up to their last two studio EPs (The Apology: Parts 1 & 2). Titled Bomber Heights the singer-songwriter-guitarist is also joined by original 50 Peso Reward band members Brooks Kendall (bass) and Danny Skinner (guitar, banjo), as well as a number of other great collaborations of friends old and new. These include Zach Galindo (lead guitarist on all previous RP50PR records), Gabriel Pearson and Hank Early (both current members of Turnpike Troubadours), drummer Grady Don Sandlin (RTB2, Raised Right Men), along with Daniel Creamer(Jonathan Tyler), Andy Rogers (Raised Right Men) and Adrian Hulet (formerly of Oso Closo). Renowned producer Matt Pence (Centro-Matic, Justin Townes Earle) worked his magic on the record.
Parker’s sense of songcraft along with his warm vocals are in top form, as is the dynamic that the Peso’s add to both rocker and ballad alike. From melodic numbers such as “Steppin’ Into Sunshine,” “The Road Between None and Some” and the lilting “Moon” to the sturdy Americana of “Night In My Hand” and “Skin and Bones” (a beefed-up roots-rock version that was originally performed on the Live in the Living Room album) this could, after over 10 years of writing and recording, arguably be the defining sound of RP50PR.
Rodney Parker & 50 Peso Reward’s Bomber Heights will be available September 16 on CD and digital formats.
Today, Ghettoblaster has the pleasure of premiering the afore mentioned track, “Skin and Bones,” which you can enjoy below. This is what Parker had to say about it.
“‘Skin and Bones’ is a part of a trilogy of tunes I wanted to write about a guy who lost his wife. So far I’ve only written two, this one and ‘Megaphone.’ I need to get to work on the third. ‘Megaphone’ came out earlier, on an EP called The Apology: Part 1, but ‘Skin and Bones’ is the first song in the narrative. It describes the days between her death and her funeral, and the husband’s conflict about their relationship. In other words, your standard feel-good party tune.”