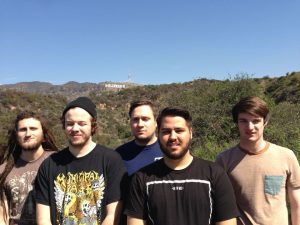 Tampa rock band Rescuer has announced a co-headlining tour of the East Coast, with neighboring Orlando hardcore band Direct Effect, this spring in support of their forthcoming album, Anxiety Answering, which is due out on June 3 via No Sleep Records.
Earlier this month, Rescuer announced the upcoming release of their second full-length album, Anxiety Answering, and debuted their new song “Out of Focus” with BrooklynVegan.com. The record was produced by Jack Shirley (Deafheaven, Joyce Manor) at The Atomic Garden studios in Palo Alto, CA.
Direct Effect are currently touring in support of their recently released album, Sunburn, which is available now from Tiny Engines.
Ghettoblaster recently caught up with Rescuer’s JP Marra to discuss the jaunt.  This is what he told us.
What kind of vehicle are you travelling in, and what are you doing to outfit it for maximum comfort?
We don’t have a van as of now, but we’ve been borrowing a conversion RV van type thing from a friend. It’s pretty awesome. The two front seats combine with the two captains chairs in the front to make a bed, and the back bench also folds into a bed. It has a microwave, TV, fridge, and even a weird little bathroom closet (that goes unused). When you’re plugged into an outlet it also has AC when the van the van is shut off. We usually just find a place to park with an outlet close by, plug in, and crash in the van while watching Curb Your Enthusiasm and eating microwavable chana masala.
What is the planned playlist for your travels?
Spotify is our best friend. Our most recent trip saw a lot of Manchester Orchestra over the stereo. The Smiths are a daily play as well. It’s usually drivers choice. Our fill in drummer was big into playing Rich Homie Quan over and over again, so that was something.
Which of the cities that you’ll be visiting are you most excited about and why?
On this next run we are hitting Bled Fest in Howell, MI. I’m beyond psyched to attend and play this fest. I hear it’s in a school, so that should be interesting.
Which of your destinations are you most anxious about?
The day after Bled Fest, we’re playing Toronto. There are so many horror stories about crossing the border. We’ve done it just the one time with letlive. and it went well, but I’m always nervous about the prospect of not being let in for whatever reason. I’m trying to hang with Canadians and eat poutine though, so I hope it works out.
What are the top three essential, must-have items that you take on the road with you?
Baby wipes. Headphones. Pillow.
What will you miss most about home while you are away?
Our house pig, Marceline.
Do you keep a diary during your travels? If so, is it public? Can we share it?
No diary. Mostly we just post unflattering pictures of each other sleeping on the internet. Maybe on this next run we’ll update our site with some stupid pictures and stories.www.rescuerfl.com
What is the crazy thing you’ve seen on the road during this or other tours?
The craziest thing I’ve seen on the road was the insane blizzard we drove through last time we were in Canada, driving from Montreal to Toronto. The interstate was closed at some point, so we had to pull off in the middle of the night to find a place to sleep. It was negative 17 degrees outside, so the van wasn’t an option. We found some sort of house that rented out rooms in their backyard motel thing, slept for a few uncomfortable hours, then got back on the road. It took 16 hours to complete a generally six hour drive. Along the way we saw five flipped over semis and countless accidents. Crazy stuff. How do people live there?
(Catch Rescuer at one f the following dates:
Rescuer Tour Dates (w/Direct Effect):
May 16 – Tampa, FL – Epic Problem
May 17 – Orlando, FL – The Space
May 20 – Baltimore, MD – Charm City
May 21 – Philadelphia, PA – Golden Tea House
May 22 – Brooklyn, NY – Suburbia
May 23 – Cleveland, OH – Mosh Eisley
May 24 – Howell, MI – Bled Fest*
May 25 – Toronto, ON – TBA
May 26 – Bethlehem, PA – The Cove
May 27 – Washington, DC – Casa Fiesta
May 28 – Charlotte, NC – Area 15
May 29 – Atlanta, GA – Masquerade
May 30 – Tallahassee, FL – TV Land)