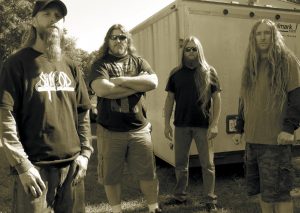 In September, Florida death metal merchants Obituary are heading out on their first North American headlining tour in over three years! The Carnival of Death Tour marks Obituary’s first full U.S./Canadian tour run as a four-piece with legendary death metal alumnus Terry Butler (Death, Six Feet Under, Massacre, Denial Fiend) on bass.  For this special journey, the band — vocalist John Tardy, drummer Donald Tardy, guitarist Trevor Peres and Butler — are working on compiling a special fan-generated set-list that will delve deep into their back catalog to include tunes predominantly off their renowned first three full-lengths: Slowly We Rot, Cause Of Death and The End Complete. To help the band map out their setlist, fans have been asked to drop by their official Facebook and Twitter pages with their song picks.
Obituary are currently writing the follow up to their Darkest Day full-length, released in 2009 via Candlelight Records, with official details to be announced in the coming weeks. Ghettoblaster recently caught up with Obituary’s Donald Tardy while he packed for the tour to ask a few questions about being on the road and being American.  Here’s what he told us…
What kind of vehicle are you travelling in, and what are you doing to outfit it for maximum comfort?
The Carnival of Death Tour starts Sept. 8 and we will be traveling in a Prevost H3 tour bus equipped with the only two important and necessary ingredients…hops and barley.
What is the planned playlist for your travels?
I am sure there will be plenty of Slayer, Lamb of God and Willie Nelson blasting daily along with whatever the rest of these fools are listening to…. SLAYER!!!!
Which of the cities that you’ll be visiting are you most excited about and why?
I’m looking forward to traveling across Canada on this tour. We will be playing many cities that we don’t get to very often if not ever so that should be fun.
Which of your destinations are you most anxious about?
We will be playing in NYC on September 11th so that makes me pretty anxious and excited to be in the city on this momentous occasion. It’s been more than a decade yet it’s still hard believe something that horrible happened. I’m sure families of the victims are dealing with their sadness from their losses….WE ARE VERY PROUD TO BE AMERICANS.
What are the top three essential, must-have items that you take on the road with you?
Drum sticks, cell phone and clean underwear.
What will you miss most about home while you are away?
My cats….All 180 of them.
Do you keep a diary during your travels? If so, is it public? Can we share it?
No, No and No.
That is the crazy thing you’ve seen on the road during this or other tours?
Craziest?? Don’t know, but I do remember once while we were touring S. America we were trying to fly from Argentina to Brazil and it was so foggy outside they grounded all the planes because the radar system used at the airport was so ancient that it would not work in the fog. All of the passengers were so mad and rude, the police were brought in and all the airline employees in the airport left without explaining anything to anyone and once an official announcement was made it wasn’t in English so we had no idea what was going on. Fun, fun…
We were stock in the airport for 20 hrs and had to sleep on the tile floor until the next day.
(Check out the band at one of the following dates:
OBITUARY: Carnival of Death Tour 2012
w/ Broken Hope, Decrepit Birth, Jungle Rot, Encrust
9/08/2012 Haven Lounge – Orlando, FL
9/10/2012 Empire – Springfield, VA
9/11/2012 Gramercy Theatre – New York, NY
9/12/2012 Bogie’s – Albany, NY
9/13/2012 Imperial – Quebec City, QC
9/14/2012 Foufounes Electriques – Montreal, QC
9/15/2012 The Opera House – Toronto, ON
9/16/2012 Peabody’s – Cleveland, OH
9/17/2012 Reggie’s Rock Club – Chicago, IL
9/19/2012 Osborne Village Inn – Winnipeg, MB
9/20/2012 The Exchange – Regina, SK
9/21/2012 Pawn Shop – Edmonton, AB
9/22/2012 The Level Nightclub – Kelowna, BC
9/23/2012 Studio Seven – Seattle, WA
9/25/2012 The Alley – Reno, NV
9/26/2012 DNA Lounge – San Francisco, CA
9/27/2012 Key Club – West Hollywood, CA
9/28/2012 El Rey Theatre – Albuquerque, NM
9/29/2012 Trees  – Dallas, TX)