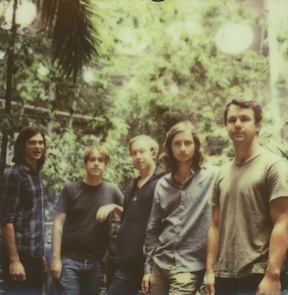 Northern California quintet Sleepy Sun deliver hazzy, fuzzed-out, and psych tinged rock music that at once recalls Haight-Ashbury’s acid-gobbling yesteryear as well as the more recent ’90s grunge rock explosion.  While they aren’t the heaviest band on the current musical landscape, they’re certainly unruly at all the right times. Imagine Soundgarden doing Iron Butterfly’s “Innagadadivida” and you’re battling dry mouth and red eyes in Sleepy Sun’s formidable ballpark.
The evolved sound captures the results of six years of exploration and growth that has found the band building speed and confidence as they created their own smoke-filled, black-lit world, which they’ve unleashed via three heavy and debaucherous albums. The band released a new 7″ in mid-October via Dine Alone Records and to celebrate they join City and Colour on his fall tour of the U.S. No strangers to high-profile support tours (they’ve toured with Arctic Monkeys and The Black Angels), CandC’s Dallas Green is bound to discover they’re a tough act to follow when they’ve erupted in earthquaking riffage all over the stage. And if he doesn’t secure his personal stash of the “green and leafy” stuff, it is bound to come up missing with these guys around.
Ghettoblaster recently caught up with Sleepy Sun guitarist Matt Holliman to discuss being on the road, the little trailer that could, Teenage Mutant Ninja Turtles, and more.  This is what he told us.
What kind of vehicle are you travelling in, and what are you doing to outfit it for maximum comfort?
We’ve still had the same van and trailer for the past four years or so. There were some 150k miles put on the engine during a three-year period when we were touring non-stop. The trailer has earned some serious stripes- it’s been hit by multiple deer, backed into and rear-ended by cars and hit by a semi-truck in New Jersey on the way to a show in NYC. I think we were on tour with Autolux at the time. Still made the gig, regardless of being stranded on the side of the road for three hours while waiting for police to arrive to take an accident report. The truck driver never stopped so I guess it was technically a hit-and-run. Nearly blew the axle clean off.
It terms of comfort, we keep it pretty low key. No TV’s/video games, stuff like that. Most of us are book nerds, so it’s easy to balance between novels and bathroom humor. We do have some curtains though! Thanks Mom!
What is the planned playlist for your travels?
Our band regularly collects some 50+ demos/CDs/mixtapes every tour from support bands, friends, etc. We try to listen to most of them. Consequently we have a milk crate by the front seats that’s filled once a month, and we either have to store them or toss out the excess. We still don’t have an AUX input for the stereo, so we use this terrible FM transmitter. Most everyone just plugs into their own audio gear, so it’s usually up to the driver to pick the cruising tunes.
Which of the cities that you’ll be visiting are you most excited about and why?
I’m looking forward to playing Chicago on Halloween night. Still haven’t figured out if we’re going to dress up or not. Getting together regalia for five people, or keeping a theme, can get a little difficult. We did Teenage Mutant Ninja Turtles one year. That was rad. Even our sound guy dressed up as KC Jones, and our merch dude/aux drummer was Master Splinter.
Which of your destinations are you most anxious about?
The midwest will likely be cold as Hell in November. Hitting black ice is always a drag, but just part of the experience I guess. Thankfully we haven’t had any major catastrophes over the years, and when conditions get too gnarly on the road, we just pull over and sleep for the night. Tornadoes are the burly ones- we drove on the outskirts of one at night during the first tour, and just barely missed all those bad ones that blew through Texas a couple years ago.
What are the top three essential, must-have items that you take on the road with you?
1) Socks 2) Inflatable mattress pad 3) Sunscreen
What will you miss most about home while you are away?
San Francisco has some fantastic food, and touring makes me really miss that. Once you hit the long stretches of highway, your options become very limited. You’re either eating some really horrible fast food, or drive way out of the way to find a decent grocery store so you don’t get scurvy.
Do you keep a diary during your travels? If so, is it public? Can we share it?
Not really. We all kinda post on our Twitter, which is mostly non-nonsensical, inside joke crap. I think we may try to get a photo journal going. A friend is going to hop in the van with us half-way through the tour and she’s a great photographer, so we’ll likely see some of that surface.
What is the craziest thing you’ve seen on the road during this or other tours?
I think we’ll just keep those within the family.
(Catch Sleepy Sun on tour with City and Colour here: