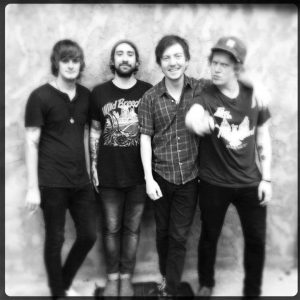 Atlanta’s Turf War are currently on the road bringing their Southern-tinged slacker punk sounds to the masses. The band makes high-powered, catchy, sweat-soaked rock ’n’ roll similar to their brethren Deer Tick and Black Lips.  But perhaps more than either of those aforementioned acts, Turf War makes the kind of unapologetically aggressive and urgent pop music that was the stock-in-trade of alt-rock forebears The Replacements and is known for putting on a full-bore, beer-fueled live show.

Ghettoblaster recently caught up with Turf War’s John Robinson to discuss the details of the band’s most recent tour and travels (with Lee Bains III & The Glory Fires in support of Turf War’s Great Escape EP).  This is what he said.
What is the planned playlist for your travels?
We listen to a lot of Stones, Pavement, Dinosaur Jr., classic rock, Velvet Underground, Fleetwood Macdonald, etc.
Which of the cities that you’ll be visiting are you most excited about and why?
North Hampton, Mass, was a pretty awesome little city, but I’m most excited about Chicago because we have yet to play a club show there, only a house show. We’re always excited to go to Nashville too that’s like are second home because we have so many friends there and we recorded our new record there.
Which of your destinations are you most anxious about?
Chicago because it’s probably gonna be colder than a witches teeties.
What are the top three essential, must-have items that you take on the road with you?
Since its winter. long johns, boggin (beenie cap for ya northys), sleeping bags, cigarettes , pillows, headphones, a book, lots of socks, and a good head on ya shoulders, because without that you’re screwed.
What will you miss most about home while you are away?
For me my wife is my life so it’s always a bummer to be away from her, but I don’t know how the rest of the guys feel. Maybe they will miss their teddy bears the most because they have to leave them behind so they don’t make other teddy bears jealous.
Do you keep a diary during your travels? If so, is it public? Can we share it?
No, no, no. I don’t keep a diary. No one in this band keeps a diary because we aren’t journalists and we’re grown men.
What is the craziest thing you’ve seen on the road during this or other tours?
We saw a house burn down up close and personal. It wasn’t funny it was really devastating for the guy whose house it was. We alerted the neighbors that the house next to theirs was burning down so I felt like I had done a good deed, but It really made me sad for the guy who’s house burnt down. That’s the craziest thing I’ve ever seen on tour. And I was as drunk as ever when it happened so it was very surreal. We also got a knife pulled out on us in Tulsa by a hipster wearing a poncho. That was the dumbest /funniest situation we’ve been in.
(Catch the band at one of these remaining dates:
01.31 – Philadelphia, PA – North Star Bar
02.01 – Brooklyn, NY – Shea Stadium
02.03 – Columbus, OH – The Woodlands
02.04 – Cleveland, OH – Beachland Tavern
02.05 – Chicago, IL – Beat Kitchen
02.06 – Normal, IL – Firehouse
02.07 – Bloomington, IN – Russian Recording
02.08 – Nashville, TN – The Basement
03.11-03.15 – Austin, TX – SXSW)