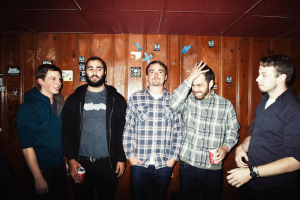 Ridgewood, NJ post rock outfit Prawn recently began recording a new full-length with Greg Dunn (Moving Mountains) and have plans to release it in late spring/early summer.  The follow up to 2012’s well-received Ships, the new album will be recorded at AudioPilot Studios in Boonton, NJ and will be preceded by a split with Rockford, IL’s Joie De Vivre, out on February 11 via Count Your Lucky Stars/Topshelf Records.  The band also released a 4-way split with Frameworks, Kittyhawk and Droughts last November on Fair Weather Records.
Before the new record hits the streets, they’ll be touring with labelmates You Blew It! and Special Explosion.  Ghettoblaster chatted with Prawn’s Jamie Houghton about the trek.  This is what he told us.
What kind of vehicle are you traveling in, and what are you doing to outfit it for maximum comfort?
We tour in a Chevy G-20 Conversion Van named Marla.  She’s a pretty comfortable gal as is, but we hope to move the seats around on this next tour so we can fit our new member of the band in the van.  As well as all of our equipment.
What is the planned playlist for your travels?
Typically, we have a constant playlist when we tour that consists of these bands:
The National, Saves the Day, Explosions in the Sky, Joie De Vivre, Foxing, The Appleseed Cast, Grown Ups, For Ours and Hours,You Blew It!, Bombay Bicycle Club, Beyonce’s ‘Drunk in Love’, Katy Perry, and any kind of traditional Irish music.
Which of the cities that you’ll be visiting are you most excited about and why?
We’ve been to almost all these cities on previous tours, so we’re excited to go to all them to see some old friends.  If I had to choose one of them it would be Bard College because it’s the first day of tour, we’ve never played there, and who doesn’t love a college party?
Which of your destinations are you most anxious about?
I guess Philly because when Prawn first started touring we had problems getting shows there.  When we did get shows there they were kind of a bust.  Although, the last couple times we’ve been through Philly the shows have been great so we’re hoping to keep that momentum going.
What are the top three essential, must-have items that you take on the road with you?
A sleeping bag, beer/booze, and Old Spice deodorant.  None of that speed stick crap.
What will you miss most about home while you are away?
We all love touring, but definitely start to miss our beds, food, and women.
Do you keep a diary during your travels? If so, is it public? Can we share it?
I keep a journal when we go on long tours.  The You Blew It! tour is a short one for us, but we have a long one coming up soon.  I’d be willing to share it, but be warned it’s mainly just a beer log.
What is the craziest thing you’ve seen on the road during this or other tours?
It’s hard to pick one thing out because when you’re touring I feel you’ve just made yourself ten times more vulnerable to the crazies out there.  This one time we got stuck in Montreal because our van’s transmission died.  Our great friend David Mitchell housed us for five days while we harassed the mechanic who was about a mile walk away.  While walking back one day we jokingly beat up Kyle on the side of a highway. Someone driving by saw this, stopped, reversed the car, rolled down the window, then flipped off Kyle.  It was epic.
(Catch Prawn at one of the following dates this winter:
w/ You Blew It!
2/4/14 Annadale On Hudson NY @ Bard College
2/5/14 Purchase, NY @ SUNY Purchase
2/6/14 New Britain, CT @ Pulaski Club Downstairs
2/7/14 Cambridge, MA @Cambridge Elks Lodge w/ Crying
2/8/14 Brooklyn, NY @ Shea Stadium w/ Crying
2/9/14 Philadelphia, PA @ The Fire  w/ Crying
w/ Special Explosion
3/3/14 College Park, MD @ Hostage House
3/4/14 Richmond, VA @ Gallery 5
3/5/14 Chapel Hill, NC @ Chapel Hill Underground
3/6/14 Atlanta, GA @ Wonderroot)