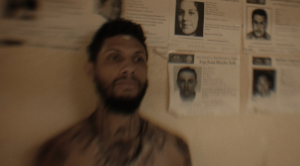 Kyle Rapps delivers a distorted, paranoid new banger for those who keep it 1984, with “Bunker,” produced by NYC’s Dollar Bin.

The track is dedicated to his brother, Ben, who resides in the rapper’s former stomping grounds in New Jersey. And whenever they get together, Rapps (who now resides in Mexico City) walks away with lyrical inspiration in the form of out-there ideas and perspectives, some of which helped shape the Cannibal Ox-reminiscent “Bunker.”
Those thoughts show up in the form of bars like, “You thought it was rap/ I’m an agent transmittin’ from a submarine 55 miles underneath the nautical map.” Rapps also gives a shout out to the Metroid video game franchise, claims that we all have chips under our skin, and potentially gets nabbed before his verse even ends.
As we wait for more new material from Rapps, be sure to check out his recently released Colossus Theory effort. It was produced entirely by Vulkan the Krusader, whose credits include A$AP Rocky’s “Excuse Me” off At. Long. Last. A$AP.
Kyle Rapps Online: