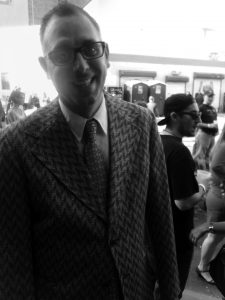 Local Promoter, Tony Susco
Very little happens in Jersey City’s music scene without the participation of “Dancing Tony” Susco. He’s that one key person that every scene turns to, the guy who makes it happen, often at great personal sacrifice and without much in the way of remuneration or glory. During the cold winter months, you can find him spinning records at local watering holes like Lucky 7 or the Lamp Post, and this year he hosted a New Year’s Eve bash with several local bands at a newly-opened recording studio in downtown JC. But Dancing Tony is busiest during the warm weather months, when he books and hosts a weekly live music series outside the Grove Street PATH station, or puts together multi-band benefits at the Historic Jersey City & Harsimus Cemetery, a beautiful site that pre-dates the Civil War and relies on private donations to operate.
“It definitely is a challenge to promote live music in Jersey City,” said Susco, “which is why the biggest shows I do are in a cemetery. But that’s what comes with the territory here. I think a lot of us are hoping that by next Spring, there will be a couple of new venues that will open up the market. And the city has already helped things by amending the entertainment ordinance, so that more places are hosting music. So I think you’re going to see an upswing in Jersey City”.
Part of that optimism comes from rumors that Todd Abramson, former booker and co-owner of Maxwell’s in Hoboken, will be doing live music at White Eagle Hall, which is currently being renovated. And Jersey City’s new mayor campaigned on a pro-arts program. “What people have to understand is that while Jersey City is a fairly large urban city, it still operates like a small town in many ways,” Susco said. “And that’s especially true with music. When you have a smaller scene, you have more support in a way. All the bands here know each other, they all play shows together, they all are willing to play for free when we do our benefits. Everyone’s really behind you. In a way it’s like one of those high school sports movies and the basketball team from the small town that makes the state championships. And everyone in town is pulling for them. That’s what our music scene here is like.”
“Live music is a business, like any other business, and you always have to look at the question of whether people can make money from it,” Susco added. “On the one hand, we have all these new businesses moving into town and that’s great. On the other hand, are struggling artists finding it harder to live in downtown Jersey City because the rents keep going up? Damn right they are. It’s all a matter of striking a balance.”