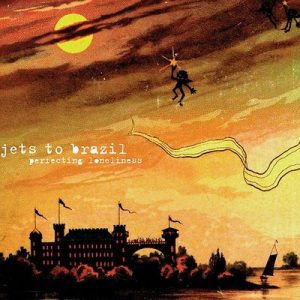 Aggressive Brighton MA-based rock quartet Make Do And Mend released their brand new studio album titled Everything You Ever Loved last Tuesday via Rise Records.  Produced by Matt Bayles (Mastodon, Minus the Bear) at Red Room Recording in Seattle, WA, the record showcases a band that has earned itself a solid following from its unyielding live presence honed through years of rigorous touring.  Following a series of well-received EPs and their acclaimed 2010 debut album, End Measured Mile, the rock quartet continues their forward thinking, sensitive approach to dynamic rock music, which is destined to be one of this year’s heavy hitting albums.  Ghettoblaster caught up with Make Do And Mend bassist Luke Schwartz to discuss an album that had a profound impact on his development as a musician and dude.  Here’s what he told us…
What is your favorite album?
Jets To Brazil’s Perfecting Loneliness.
Do you remember when you received or purchased the album?
Summer ’08, it was recommended by  a friend.
What is your favorite song on the album?
The title track, “Perfecting Loneliness”
What is it about the song that resonates with you?
The music and the lyrics coincide so perfectly that it just makes for a beautiful, but miserable, song.
Have you ever covered a song from the album?
Sadly, no.
What is it about the album that makes it stand out against the band’s other output?
The production quality is perfect and the songwriting is a little bit more mature than their previous releases.
Have you ever given a copy of this record to anyone?  What were the circumstances?
I don’t think so. It’s hard to find the time to recommend a depressing record to someone.
Which of the records that you’ve performed on is your favorite?
Everything You Ever Loved.
What is your favorite song on the album and why?
“Hide Away” because I think the bridge is my favorite part on the entire record. It was a really fun song to write and record.

Tags: Jets To Brazil, Make Do and Mend, Rise Records