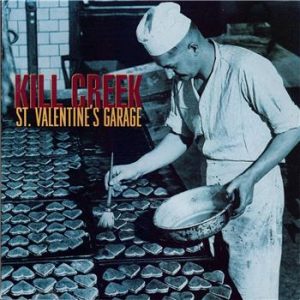 For a decade, Gared O’Donnell laid waste with his monolithic band Planes Mistaken For Stars.  When he was sequestered in his down time, he worked on several ideas that eventually became the output for Hawks And Doves.  Recorded in different parts of the country with Jon Gaunt, Matt Radick, and Chris Wollard, the resulting album, Year One, is an eerie, slow burning and cathartic record that bites at Motown and Afghan Whigs influences.  We recently caught up with O’Donnell before Hawks and Doves hit the road for a Summer tour (and before O’Donnell brings PMFS out of retirement for an August reunion run) to discuss an album that had a profound influence on him.  Here’s what he had to say about Kill Creek’s St. Valentine’s Garage…
What is your favorite album?
Gared O’Donnell: That is a question I’ve grappled with on more times than I care to admit, and I always come up with the same answer — I don’t fucking know.  I can’t pick. You love all your favorites for totally different reasons, moods, pictures painted, etc.  It’s like trying to pick between my kids. So in lieu of playing it straight, I am going to tell you what my favorite most underrated/overlooked album is.  I could focus on the more obvious choices, ie. Afghan Whigs, Replacements, Jawbreaker, but I feel they have all had their fair due in the press. So bruthas and sistas, I present to you St. Valentine’s Garage by Kill Creek.
Do you remember when you received or purchased the album?
Gared O’Donnell: I was 17 yrs old.  So it must have been 94 or 95.  I picked it up per the suggestion of the manager of the local record store (thanx Cam).  At the time I was just discovering bands like Seaweed, Samiam, Jawbreaker, all bands that were vastly underlooked, and in some cases just now getting the respect they all deserve. But not in Kill Creek’s case.  Bummer because they really should be cannon by now. I only know a handful of people that know about them, and they all started bands.
What is your favorite song on the album?
Gared O’Donnell: “Fruit Pie” would be the contender for the “single,” but at seventeen years old “Gett On” really flipped me out with lyrics like “She’s fucked forever, she won’t fuck anymore, she’s got her legs tied together, she says boys destroy.”  It made me understand that songs could be accessible and gritty all at once if balanced tastefully.
What is it about the song that resonates with you?
Gared O’Donnell: The same reason that the whole record does, its hookiness belies the darkness and honesty that lies beneath a sonic sheen.  The Ed Rose production with Kill Creek is the best output I’ve heard from him.  Thick but not muddy, shimmering at times, but not twinkly.  The lyrics are really worth tracking down if you can find them. Very adult oriented stuff. Let’s just say I can relate to them even more 18 years later.
Have you ever covered a song from the album?
Gared O’Donnell: No, and it’s almost too close to heart for me to even think about tampering with. I’m not sure what we could add. They already nailed it.
What is it about the album that makes it stand out against the band’s other output?
Gared O’Donnell: Nothing, their other two LPs are stellar as well, albeit not as aggro.  It’s just my first introduction to them.  I celebrate their whole catalogue. Proving Winter Cruel and Colors Of Home are both top notch; truly a band ahead of their time.
Have you ever given a copy of this record to anyone?  What were the circumstances?
Gared O’Donnell: Yes indeed.  Whenever I give people records its either because they were looking for it to no avail or because I felt that they were listening to far inferior music and needed their ears opened to killer tunes.
Which of the records that you’ve performed on is your favorite?
Gared O’Donnell: Again I can’t pick a favorite, so I’ll go with the underdog Hawks and Doves’ Year One. – In this case it’s because it’s been neglected, the red headed step child of sorts.  Buy it, be the coolest kid on your block.
What is your favorite song on the album and why?
Gared O’Donnell: “North Of Tenth,” because that girl just married me. Cheers and take care of each other.
(In support of his debut album Year One, released last fall on No Idea Records, former Planes Mistaken For Stars frontman Gared O’Donnell has announced plans to take his new solo project Hawks and Doves on a Midwest and East Coast tour of the States this coming summer.  Here are the dates:
6/14 Detroit, MI @ Smalls Bar *
6/15 Cleveland, OH TBA *
6/16 New Jersey TBA *
6/17 NYC, NY @ Saint Vitus Bar *
6/18 Boston, MA @ The Middle East *
6/19 Washington, D.C. @ DC9 Night Club *
6/20 Richmond, VA @ Gallery 5 *&^
6/21 Charlottesville, VA @ Badd Idea Int’l HQ *&%
6/22 Louisville, KY @ The Mag Bar *
6/23 Covington, KY @ The Avenue Lounge *#
6/24 Chicago, IL @ Township *
* = w/ Future Now
& = w/ Worn in Red
^ = w/ Catalyst
% = w/ Horse Fang
# = w/ New Strange
Planes Mistaken For Stars have also announced a Summer 2012 reunion tour.  In addition, the band will be reissuing the 2006 Mercy LP on No Idea Records.  Here are those dates:
Aug. 4th. Chicago @ The Ultra Lounge *^
Aug. 5th. Lansing, MI @ Macs Bar *%
Aug. 7th.Boston, MA @ Great Scott
Aug.8th. Brooklyn, NY @ Saint Vitus ~&
Aug.9th. Hoboken, NJ @ Maxwells ~
Aug.10th. Blacksburg, VA @ We Got Brains! Fest #
Aug. 11th. Washington, D.C. @ Red Room #
Aug. 12th. Richmond, VA @ Strange Matter #
Aug.14th. Cincinnati, OH @ TBA
Aug. 15th. Peoria, IL @ Brass Rail /
* = w/ Worn in Red
^ = w/ Angry Gods
% = w/ FenceMen
~ = w/ The Sun, The Moon, The Stars
& = w/ Model Home
# = w/ Regents
/ = w/ The Forecast, Lark’s Tounge, Angry Gods)