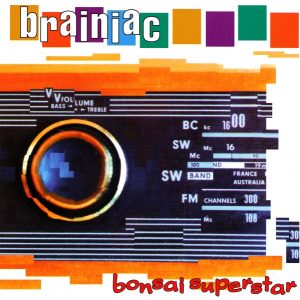 Although Oh Condor’s musical roots can be traced to 90s indie rock, their production is a little too slick for lo-fi, too ambitious for slacker rock, and too fun for shoegazing.  The quartet’s Reflector EP, which hit the streets via Gas Daddy Go! in February showcases a scrappy and ambitious Dayton, Ohio-based quartet capable of and committed to chasing down moments of pop and rock brilliance and setting them to tape. None of this is tremendously surprising considering the strength of the band’s formidable back catalog of self-released albums and EPs.
Ghettoblaster recently caught up with Oh Condor guitarist/keyboardist, vocalist to discuss his current favorite record, by Oh Condor hometown heroes, Brainiac’s Bonsai Superstar.  Here is what he told us about why it kicks ass…
What is your favorite album?
Such an insane question! What’s your favorite color? Who’s your favorite child? There are a great many records that I could probably listen to non-stop, but today I’m going to say Bonsai Superstar by Brainiac because I actually had a dream about them last night. Well, kind of. I had a dream that John Schmersal had borrowed my headphones for some reason and I really needed them back before midnight for delivering someone’s baby, so Tyler Trent and I were driving around in this weird little red car looking for him. I think it was an ’87 Mx7, but I’m not sure if that’s an actual thing or not.
Do you remember when you received or purchased the album?
For a while, I just had a dubbed cassette of it that someone gave me, probably Shane Weber (Oh Condor). Or more likely he left it in my car, and I just kept it. I remember thinking it was a mix-tape at first, because the songs seemed all over the place to me, but I listened to it constantly. It almost never left the tape deck in my car until it broke. I forget where I got my first official copy of the record, but it’s been out of print for a long time, and I actually bought a second copy on eBay years ago as a backup. I guess someone at Dutch East India found a box of them laying around, and threw them online for like $20 a piece brand new.
What is your favorite song on the album?
Probably “Radio Apeshot.”
What is it about the song that resonates with you?
I really love the dynamics on that song, how it bounces back and forth between these sparse, almost free-jazz verses, and the hyped up, sassy pop choruses. It’s like the song is almost falling apart at times, and then they just turn it back around. Oh, and it doesn’t hurt that the lyrics read like something out of some old pulp detective novel that was, penned by William S Burroughs.
Have you ever covered a song from the album?
No, but I’ve covered a couple of songs off Hissing Prigs in Static Couture. Human Reunion used to cover “Nothing Ever Changes” semi-regularly, and the few times that I’ve played with Captain of Industry, we did “Vincent Come On Down.”
What is it about the album that makes it stand out against the band’s other output?
Whenever I hear the opening guitar line of “Hot Metal Dobermans,” it feels like I’ve arrived and I know the next 33 1/2 minutes are going to be great.  The whole thing just has this unhinged, warbling feel to it, like someone is flipping through the stations on a busted up AM radio, and every one is playing your next favorite song.  So much catchy pop sensibility, but warped up into this amazing, demented sound palette of detuned guitars, incredible drum beats, danceable bass lines, blipping synths and effected vocals.
Have you ever given a copy of this record to anyone?  What were the circumstances?
I don’t think I’ve ever actually given a copy of it to anyone, but I know I’ve played it for plenty of unsuspecting friends, and I’ve also included some song of theirs or another on countless mixtapes over the years.
Which of the records that you’ve performed on is your favorite?
The newest record is always my favorite, and right now, that’s the Reflector cassette Oh Condor released earlier this year. I’ve been playing with these guys in some form or another for ten years now, and I really think it’s the best work we’ve done. I always think that though, and with every new record comes my new favorite.
What is your favorite song on the album and why?
Umm.. I’ll go with “Shoot First” because it’s super fun to perform. Also I get to play guitar and synthesizer on it, and sometimes you can’t tell which is which.