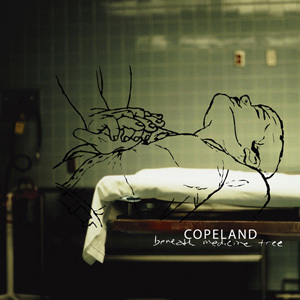 What began as the home recording project of Detroit, Michigan’s Teddy Roberts has evolved into Hampshire, a five-piece powerhouse whose music straddles the line between ’00 and modern-era emo and cathartic post-hardcore. Their new EP, Two Trains, showcases a band who’ve delivered their best, most engaging work yet; the influences are present, but you can tell the band are finding their own voice.
Ghettoblaster caught up with guitarist/vocalist Roberts to discuss one of those deep and resonating influences following Hampshire’s June east coast and Midwest tour.  This is what he said about Copeland’s Beneath Medicine Tree…
What is your favorite album?

I have many answers to that question for different reasons but the one that resonates the most with me is Copeland’s Beneath Medicine Tree. This record is the sole reason I decided to chase after the idea of being a song writer and to this day even after probably thousands of listens, I’m still inspired by it.

Do you remember when you received or purchased the album?

Back in high school my best friend put three songs from the album on my ipod so that’s all I listened to and I became obsessed. I immediately went out and bought the CD.

What is your favorite song on the album?
“California.”

What is it about the song that resonates with you?

The arrangement of it.  Its chordal structure and the lyrical content couldn’t have been more relatable to my life when I was 18 than any other song. The sappy answer to this question is that hearing the lead singer of a band so broken up over the idea of distance separating him from the one he loves absolutely kills me.
The girl I was in love with was going away to college and I was staying back home. She was only three hours away, just the idea of being able to see each other at any given moment was completely stripped away. This song is kind of the older brother of that situation. I’m talking about being three hours away and Aaron Marsh is singing about being on almost completely opposite sides of the country. I’m older now and can see some immaturity in this situation but regardless, but when I was 18 this was the most important thing in my life and I will never dumb it down whatsoever. This was the first time I could actually relate to the words in music that I was listening to. It opened my eyes to the fact that music is a lot more than just technicality and difficult chord changes over weird time signatures.

Have you ever covered a song from the album?

I’ve covered a majority of the songs off this record but my favorite one to play is “Brightest”. It allows so much time and space for phrasing that it can be portrayed in so many different ways and can still give off the same effect.
What is it about the album that makes it stand out against the band’s other output?
I’ve heard so many people say that this record is Copeland’s most immature and naive release and parts of me agree to that only when compared to the rest of their discography. I can understand the idea of musicians growing up and desiring a new sound for their band but I can’t understand the fans who won’t transition with them. This record is a perfect time capsule for two to three years of this band’s life. When compared to the time capsule that is their most recent and final release, You Are My Sunshine, you can see a lot of growing up has happened from their first record to their last. I personally think that’s the coolest part about being a fan is growing up with your favorite band and seeing them change just like yourself.

Have you ever given a copy of this record to anyone?  What were the circumstances?
I’ve burned copies of it for all my friends at some point or another. All my friends were really into Copeland back in high school and I remember one specific time actually hearing people fight and say “I liked Copeland before you did”. I remember wanting to throw up when I heard that.
Which of the records that you’ve performed on is your favorite?

Our newest release Two Trains is my favorite. It’s the first release since the beginning of Hampshire where the mindset behind the writing process was “Who cares what your earlier music sounds like, just do you and that’s all that matters” I truly believe in this. It’s such a let down when bands gain success off of a record with a particular sound and then try and re-create it. That is not real and I don’t support that. If Death Cab For Cutie’s next record has 808’s and breakdowns I’m sure I will hate it, but I will 100 percent respect that decision if the whole band truly believes it is what they need to be doing.
What is your favorite song on the album and why?
My favorite song off of Two Trains has to be “Windows.” Ever since I started writing music I became extremely fascinated with song writing theory and exploring different approaches for inspiration. For the song “Windows” instead of telling a story or setting a mood through the use of lyrics, I actually wanted to paint a mental picture in someone’s head first and foremost rather than tell a story that had a beginning, middle and end. I wanted the listener to get the same feeling they do when staring at a painting but instead they’re listening to a five-minute-long song. Also, the image I had in mind is not pretty.