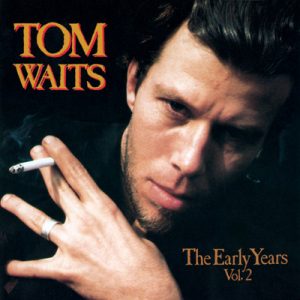 Big Harp is husband-and-wife duo Chris Senseney (vocals, guitar, keyboards) and Stefanie Drootin-Senseney (bass, backing vocals). Over the last year, the band along with their adorable two-old daughter and three-year old son have toured the U.S. with band such as Icky Blossoms, Maria Taylor, The Mynabirds, Conduits and just opened for Desaparecidos in LA. While currently based in Los Angeles, the pair have long connections to Omaha. Drootin, a member of The Good Life, has toured and recorded with acts such as Bright Eyes, She & Him, and Azure Ray. It was actually on a tour with The Good Life that she was swept off her feet by the handsome guitarist in the opening band, Art in Manila.
The band’s sophomore album Chain Letters was mixed by Mike Mogis (Bright Eyes, M Ward, First Aid Kit), and the duo is joined by their old friend Jon Voris on drums. The album moves away from the rustic, pastoral sound of their debut and towards a truer union of their backgrounds.
Ghettoblaster caught up with Stefanie as she prepared for the release of Chain Letters – on January 22 via Saddle Creek – to discuss one of her favorite albums, Tom Waits’ Early Years Vol. 2.  This is what she said about it.
What is your favorite album?
I’m not sure if I have a favorite album. I love so many albums and depending on the weather and the time of day my answer could be totally different. Right now I’m leaning towards Tom Waits, Early Years Vol. 2.
Do you remember when you received or purchased the album?
I do. I was 17. I worked at a vegetarian grocery store/restaurant called Follow Your Heart in the San Fernando Valley. On my lunch break I would walk to this amazing used bookstore down the street that had boxes and boxes of used vinyl and CD’s and spend my tip money on jazz records. One day I was looking through the CD’s and I came across Early Years Vol.2.  I was super excited. I was already a big fan of Rain Dogs and Nighthawks at the Diner.
What is your favorite song on the album?
“I Want You.”
What is it about the song that resonates with you?
It feels really honest. It’s short, sweet and simple.
Have you ever covered a song from the album?
I have covered a couple. Chris and I did a version of “I Want You” as one of my best friends walked down the aisle at her wedding. I’ve also covered “I Hope That I Don’t Fall In Love With You.”
What is it about the album that makes it stand out against the band’s other output?
It’s really stripped down.
Have you ever given a copy of this record to anyone?  What were the circumstances?
I’m not sure if I have physically given a copy of this album to anyone but I’ve introduced it to a ton of people.  I remember sometime in the late 90s Commander Venus stayed for a week at a house I lived at in Winnetka, CA. I played that record a ton for them and they seemed pretty into it. I think I played it for the Cursive dudes as well.
Which of the records that you’ve performed on is your favorite?
Really? How could I ever pick a favorite? I love them all. Wait, that’s not true — there might be a few embarrassing moments hidden away.  I was really happy with Album of the Year (the Good Life).  Right now it might be tied with the new Big Harp album, Chain Letters.
What is your favorite song on the album and why?
On Chain Letters, I like “Good News.” Because it’s fun?