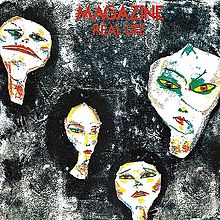 Cohoes, New York’s Self Defense Family (formerly End of a Year) are a band who first gained momentum through a full-length on seminal hardcore label Revelation Records.  Following the release, the band released EPs and slips on a dozen labels in half-a-dozen countries, and spent years on the road visiting every corner of the globe.  One such incident, resulted in the second installment of Self Defense Family’s “Island Series” of recordings.  Recorded at “Sundlaugin” in Mosfellsbær, Iceland at  the studio owned by the band Sigur Ros, the session was engineered by Birgir Jón “Biggi” Birgisson.  Melodic and infectious, the effort shows new influences taking shape in SDF’s output.
While the band prepares for yet another trip across the globe, Ghettoblaster caught up with Sean “Goody” Doody to talk about one of his most profound influences and favorite records, Magazine’s Real Life.  Here is what he told us about the album that once left him unimpressed…
What is your favorite album?
Real Life by Magazine-the 1978 debut album by the band Howard Devoto formed after quitting the Buzzcocks.
Do you remember when you received or purchased the album?
I bought a used vinyl copy of it in December 2004 after hearing the band Calvary cover their single “Shot by Both Sides.” (I could write 2000 words about Calvary’s sole album Outnumbered Is Outflanked, but I’ll refrain.) I listened to the song once and stashed the record in my collection, unimpressed. Not punk enough for me at the time-too far-out, too experimental. Three years later, I’d sold most of my hardcore records after half a decade of neglect and started exploring more adventurous music-especially post-punk. Wondering how my tastes had grown, I played Real Life start to finish. This time, it clicked. My mind was blown; I became obsessed with it, and with the band. Today I’m on my third copy.
What is your favorite song on the album?
“The Light Pours Out of Me.”
What is it about the song that resonates with you?
Most of Real Life is frantic, anxious, in a rush to pour out big ideas and big emotions. “The Light Pours Out of Me” pulls back. Where other songs feature frequent shifts in tempo and mood, this one hangs on a hypnotic beat and a pulsing bass line; for most of it, Barry Adamson plays just a single note over and over. Devoto’s lyrics are usually caustic and blunt; here, they’re abstract-a primal, arrogant declaration of his own magnificence, shot through with stunned doubt. Bracing? Chilling? Arresting? No: no fifty-cent adjective does this song justice. I would love to have been in the studio the day Magazine wrote it, to see their faces as everything fell into place and they realized their power as a band.
Have you ever covered a song from the album?
Self Defense Family have poor luck with covers, so no. Still, I’d love to try “The Light Pours Out of Me” or “Burst.” Better yet: the short, punkish “Recoil.” Often I sound-check with Magazine songs-does that count? No?
What is it about the album that makes it stand out against the band’s other output?
Usually a band’s first record doesn’t appeal to me as much as its later material. I prefer hearing bands once they’ve developed the self-assurance to expand their sound (and after they’ve had time to become better musicians). Magazine’s second and third albums, after their style had coalesced into a distinct whole, are technically better than Real Life; next to them, their debut sounds unsure. One can easily pick apart its influences: Roxy Music, Can, the Stooges, Booker T. & the M.G.’s. It’s not a melting pot; it’s a mosaic. But it swells with the excitement of a band who knew they were smashing through into uncharted territory. When it came out, one reviewer enthused, “No one that has the slightest interest in the present and future of rock ‘n’ roll should rest until they’ve heard Real Life“; I can’t help but agree, even if the album is now 34 years old. It bristles with the nervous glee of discovery. It’s a manifesto. Magazine’s later music built confidently on the ground Real Life cleared, after the rubble had been hauled away. It’s excellent, but the band couldn’t recapture that first rush of inspiration. To their credit, they never tried to fake it.

Have you ever given a copy of this record to anyone? What were the circumstances?
Sadly, no. Real Life may be Magazine’s most accessible record, but it’s still a difficult album to get into (although recently our guitarist Benny became a fan). Even as they longed for mass appeal, the band defied convention at every turn; listeners often found them needlessly challenging. Most people I know dislike them. But those who love Magazine really love Magazine; people always want to talk about their records. It fascinates me to learn what resonates with others about a band that was so willing to be arty and cerebral and alienating. And I certainly recommend them to anyone willing to listen.
Which of the records that you’ve performed on is your favorite?
Self Defense Family have so many releases that I literally can’t keep track of them anymore. We write and record constantly, even when songs have no particular destination in mind. You Are Beneath Me deserves a mention as my first full-length after 15 years of playing music. My favorite, though, is our latest single, “Self Immolation Family”/”World Virgins.”
What is your favorite song on the album and why?
“Self Immolation Family.” For one, it’s really fun to play. But it’s also such a synthesis of the music I’ve discovered over the past few years, inspired in part by finally giving Real Life a chance: post-punk, Krautrock, post-rock. I’m a bassist; much of my style comes from playing along to Magazine records. This song is the closest I’ve come so far to capturing what I feel when I hear “The Light Pours Out of Me”: coolness, confidence, a sudden awareness of purpose. I hope to build further on that vibe.

(Catch Self Defense Family at one of these upcoming dates: