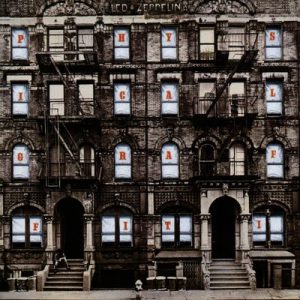 System and Station’s recent self-titled album balances melody, moments of math’y prog technicality and memorable rock riffs. Amplifying their audio ammo is producer, Larry Crane who has helped craft genre-defining releases from the likes of Pavement, Sleater-Kinney, Elliott Smith and The Decemberists. The self-titled album marks System And Station’s seventh full-length and tenth recording since forming. Performing coast to coast the group has performed with such luminaries as Jeremy Enigk, Built To Spill, Alex Chilton, Marky Ramone, The Meat Puppets and The Life & Times.
While System and Station’s record is memorable in its own rite, Ghettoblaster caught up with vocalist/guitarist Ryan Heise to discuss an altogether different record — one of his favorites – Led Zeppelin’s Physical Graffiti.  This is what he said about it…
What is your favorite album?
Too many to speak of but if I had to pick just one album in a “stranded on a desert island”  situation it would have to be Led Zeppelin’s Physical Graffiti.
Do you remember when you received or purchased the album?
I have had so many copies of the album that I can’t recall, but I remember I heard it from a girl I had a crush on when I was 13.  Changed my life.
What is your favorite song on the album?
Every song but I am profoundly moved by “Bron-y-aur”.
What is it about the song that resonates with you?
Something about the open C tuning and the passages moving from light to dark so naturally and effortlessly. It feels really magical, like there is more than just what we see yet very real. I am and was extremely moved by this song.
Have you ever covered a song from the album?
No, that is a ballsy move in my book. We just recently have been covering “Good Times Bad Times”, which is the first song Zep ever recorded. I can start there and work up. Worst thing you could ever do is an injustice to any of those songs.
What is it about the album that makes it stand out against the band’s other output?
That is a hard question because I don’t feel there was any bad material ever released into the world by them. I guess I would have to say Physical Graffiti went everywhere on the map- dark to light, happy to sad, quiet to loud. There are elements of rock, folk, middle eastern, country and jazz all done incredibly cohesively and only as Led Zeppelin would do it.
Have you ever given a copy of this record to anyone?  What were the circumstances?
No but I have had several copies borrowed and never returned.
Which of the records that you’ve performed on is your favorite?
That is a trick question because System and Station has recorded over 100 songs on 11 recordings in the past 15 years. There is a lot that I like very much and there is some that I don’t like so much.
I think they have progressively gotten better so I am going to go with our current self titled album, System and Station.
What is your favorite song on the album and why?
At the moment it has to be “Fly Us to the Moon”. It sounds, feels and moves exactly the way I imagined it. I also think the lyrics are a bit funny and the title was inspired by an album by Caustic Resin.
(Stream “Occupied” by Stystem and Station here:
http://www.artistdirect.com/entertainment-news/article/new-artist-alert-system-and-station/10491088.)