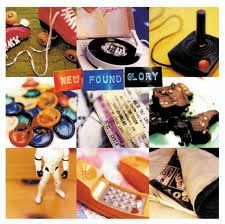 The SpacePimps are a product of the Drive-Thru Records era; a time when music and friendships went hand-in-hand, and when pop punk was revered. From the basements of the Steel City to venues across the world, The SpacePimps have been permeating their brand of pop punk to ears of listeners all over the globe. Their DIY mentality and blue collar work ethic has allowed the band to accomplish tours of the U.S., Japan and China with bands like The Wonder Years, The Starting Line, All Time Low, and other noteable punk acts.
Ghettoblaster caught up with vocalist Rishi Bahl as he prepared for the release of the band’s Eternal Boy, their third full length album that was produced by Chris Badami (The Early November, The Starting Line, Dillinger Escape Plan) and drops on July 2, to discuss a favorite from that afore mentioned era.  This is what he said about New Found Glory’s self-titled record…
What is your favorite album?
It would be a toss up between New Found Glory’s Self Titled or Sticks and Stones, but I am going to have to go with Self-Titled. NFG really caught the attention of the masses with Sticks and Stones, however Self-Titled was the record that helped them gain the cult like following that they have now. This is one of THE albums that got the ball rolling for the genre.
Do you remember when you received or purchased the album?
I remember using Napster (yes, the original version before it was banned), and trying to find someone who had the record. I had purchased “Nothing Gold Can Stay” and knew the album leaked. I finally found some person in Europe who had it and downloaded it. I downloaded it just in time to learn all the words just in time for their tour with The Teen Idols, Anti-Flag and Less Than Jake…yes that was real life then. The played at the historic Club Laga in our hometown of Pittsburgh, and you could just feel that they were on the verge. I ended up buying a hard copy of the record, and played it out until it didn’t work anymore. Memories.
What is your favorite song on the album?
“All About Her.” It is a song that they don’t play very often, but when they do, it gets the crowd going. I actually got to go onstage when I was 16, and sang the song with them…it was quite memorable and embarrassing at the same time and I am sure there is some video of it somewhere.
What is it about the song that resonates with you?
The song contains the perfect combination of relevant lyrics (about girls), aggressive instrumentation, and absolutely glorious melodies. I would say that those three components are integral to the genre.
Have you ever covered a song from the album?
The first show we EVER played, we covered 11 Blink 182-songs, one offspring song, and two NFG songs… we were awesome. We covered “Hit or Miss” and “Sincerely Me”, but not “All About Her” because I sucked too much on guitar to play the riff. Some things never change I guess.
What is it about the album that makes it stand out against the band’s other output?
All of NFG’s albums are honest without question, but this one stands out as a simple, melodic, and brutally honest album. You have to put it in the context of the music industry at the time: boy bands were flooding the market, and there was a trend of musicians not writing their own songs. NFG was a breath of fresh air, and kids really related to their honest writing style. It was 5 friends who worked their asses off, and wrote songs that all kids growing up were dealing with. I think the time in which this album came out really magnified its importance.
Have you ever given a copy of this record to anyone? What were the circumstances?
I have never given the whole record to someone, but I make mixes for friends quite often. I actually make mix CDs for them, and I can honestly say that nearly every one includes a song off of this album. Whether it is “Sincerely Me”, “Vegas”, “All About Her”, or “Boy Crazy”, the album STILL has relevance today. I know, there are new bands who are “carrying the torch”, but it is problematic when they do not know where the “torch” came from. This is one of those albums that helped shape how our genre is today, and therefore all people need to be exposed to it.
Which of the records that you’ve performed on is your favorite?
Tough question. I mean, it would be normal to say that our upcoming release, Eternal Boy, is my favorite, but I love a lot of our songs. Our last album, Stuck Here Forever has tracks that are still really important to me, and even ones that we wrote years ago are still integral to our band. I will take the lame approach and say that all of them…yes, all of them and they are all amazing…
What is your favorite song on the album and why?
My favorite song on our new album is “Brand New Me”. It is the opening track, it is powerful, gives a punch and really is one of the stronger lyrically. It is about having people in your life that are poisonous, meaning they disguise themselves as your friend, but really hold you back from being who you are.
(Visit the band here:
www.thespacepimps.net
www.facebook.com/spacepimps
www.twitter.com/thespacepimps)