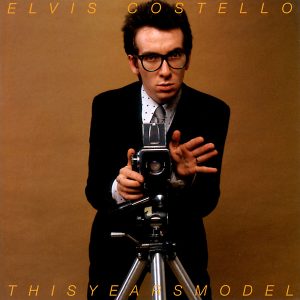 Borrowing his musical moniker (presumably) from Tom Waits, prolific Dayton songwriter Richard Lee Terrell Jr. performs fragile folk pop songs from five releases (the most recent being The Foolish Fellow released in April) as Starving In The Belly Of The Whale.  Although his moniker suggests that when questioned about his favorite record, he’d dig through the discography of Waits, his allegiance lies elsewhere.
This is what Terrell told Ghettoblaster about Elvis Costello’s This Year’s Model.
What is your favorite album?
My favorite album is Elvis Costello’s 1978 release, This Year’s Model. In 2008, tattoo artist Amanda Grace Leadman tattooed a camera with the words ‘This Year’s Model’ on my wrist.
Do you remember when you received or purchased the album?
I purchased the album in late 1999. At the time, I didn’t listen to anything that wasn’t ‘punk rock.’ I was watching an MxPx documentary about the making of their upcoming album, The Ever Passing Moment, and the band continually referenced This Year’s Model as the inspiration for the album. As soon as I was finished watching the documentary, I drove to Best Buy and bought the compact disc. I received my first record player for Christmas that year and This Year’s Model was the first LP I purchased… alongside some Huntingtons, Goldfinger, Ramones and Clash.
What is your favorite song on the album?
My favorite track on the album, this week, is “Living in Paradise”.
What is it about the song that resonates with you?
Every time I listen to the song, Costello’s lyrics grab my attention. Each additional listen allows me to discover parts of the lyrics I had previously over-listened. The melody line in the song is its own instrument. I have always admired the way the melody line and guitar riff battle for your ear’s attention.
Have you ever covered a song from the album?
I have covered multiple songs from This Year’s Model, in many different bands. Since I have been performing under Starving in the Belly of the Whale, I have covered “You Belong to Me” and have incorporated parts of “Radio Radio” into special sets.
What is it about the album that makes it stand out against the band’s other output?
This Year’s Model was Costello’s first album to use The Attractions. There is always something special about playing music with a group of new musicians. That first-love magic is overwhelmingly prominent as you listen to this album. And as a listener, I always have that ‘first-love’ bias to the first album I hear from an artist or band.
Have you ever given a copy of this record to anyone? What were the circumstances?
When I go to a record store, and see a copy of This Year’s Model, I always purchase it. I cannot count or remember how many copies of this album I’ve given away. However, this is always an album I purchase for people that need to, in my opinion, listen to better music.

Which of the records that you’ve performed on is your favorite?
My favorite Starving in the Belly of the Whale release is The Almond Tree. The songs were written to score an independent documentary with the same name. The film was an official selection at multiple U.S. film festivals in 2012. The film won Best Documentary at the American International Film Festival. The Almond Tree 7″ vinyl EP, featuring two tracks written specifically for the film, was an official Record Store Day release in 2012.
What is your favorite song on from that and why?
My favorite song on The Almond Tree soundtrack is “The Problem of Pain”. The song was written after reading a CS Lewis book. When speaking with The Almond Tree‘s director Shane Pergrem about scoring the film, I thought CS Lewis’ perspective could lend itself helpful for lyrical inspiration. “The Problem of Pain” was the first song I wrote for the film.
(Visit Terrell here: https://www.facebook.com/starvinginthebellyofthewhale#!/starvinginthebellyofthewhale.)

Tags: Starving In The Belly Of The Whale, This Year's Model