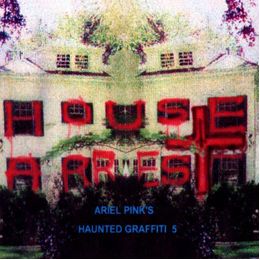 BRAINSTORM is an experimental-pop group from Portland, Oregon, whose sound pulls heavily on cumbia rhythms, western African guitar, and nostalgic soul.  The band weaves their influences into a coherent fabric of art-pop, executed masterfully and endlessly compelling.  BRAINSTORM is set to release Heat Waves on October 2 via Tender Loving Empire. The record was produced by Robby Moncrieff (engineer of the Dirty Projectors’ Bitte Orca, Youth Lagoon’s 7?, and Ganglians’ Still Living), and  shines with inescapable pop melodies, polyrhythmic singing, thunderous drumming, and shimmering guitar lines.
Ghettoblaster recently caught up with BRAINSTORM’s Patrick Phillips to discuss another heavily playful, avant garde record that sparkles in its intensely experimental approach, Ariel Pink’s House Arrest.  Here is what he told us about it…
What is your favorite album?
It’s so hard to pick just one favorite record, but I’ll do my best. I have a favorite record for nearly every occasion. There’s a favorite record for rainy Portland mornings paired with coffee, bagel, and lox (Beneath Waves by Karl Blau); there’s a record for the moment you lose cellphone service while driving out to soak in hot springs (The Getty Address by The Dirty Projectors); and there’s the one for spacing out (Replica by Oneohtrix Point Never), one for freaking out (The Devil Isn’t Red by Hella), and one for making out (Pleasureby Pure X). Even those are hard ones to select. But of course there are serious stand-outs: the “classic,” or “life-soundtrack” records that hold together a specific moment in time shared with specific people. The first record that comes to mind is House Arrest by Ariel Pink.

Do you remember when you received or purchased the album?
I was first introduced to House Arrest on a road trip from Portland to Baja Mexico I took with a group of college friends right after our freshman year. It was a lot of long drives in a car full of highly opinionated, 19-year old music snobs who felt like they had a special knowledge of the world after a year of higher education. As we crossed the Oregon-California border, my friend Natalie (who also turned me onto The Glow Pt 2 by The Microphones, which changed my life in high school) put on House Arrest. I’d never heard Ariel Pink or such intentionally lo-fi pop music before, and once my ears adjusted to the tape hiss and sputter of Pink’s mouth-made drum tracks, I was immediately struck by the great songwriting mixed with heavy avant-garde playfulness and referential, post-modern shenanigans. Of those present in the car, I can’t remember who supported or hated the House Arrest in that moment, but by the end of the road trip it was a communal favorite. I still haven’t purchased a physical copy of the album, been searching for it on vinyl for a while. Let me know if you see one!

What is your favorite song on the album?
“Alisa” is a stand out song for me, but there are so many that I love on this record. It’s hit after hit after hit. The string of songs from “Helen” through “Almost Waiting” sort of blows my mind.

What is it about the song that resonates with you?
I love how unabashedly pop this song is, everything from the girl-name title to the angsty heartbroken lyrics. This is Ariel Pink at his best: tongue-in-cheek and totally sincere. The song also sounds like some weird, obscure artifact of pop from sometime in the 70s-80s. Like maybe discovering your reclusive uncle had a penchant for bedroom recordings when he was living at home with your grandparents in his late-20s.

Have you ever covered a song from the album?
BRAINSTORM hasn’t ever covered a song from this record. In fact we’ve very rarely done covers besides the songs by Nigerien artist Mdou Moctar, one of which we just released as a split 7″. But don’t get me wrong, I’ve definitely played along to all of House Arrest on an acoustic guitar in my bedroom a few times. Maybe that counts as a cover.

What is it about the album that makes it stand out against the band’s other output?
I’m pretty stoked about where Ariel Pink is at right now with his music. Before Today is excellent, and I like that there’s a glossier production quality to his new records. However, I still long for the hazed-out, 4-track tape aesthetic of the Haunted Graffiti series of which I think House Arrest sounds the best. Also the songs are just more consistently good than say The Doldrums or Worn Copy. Being a very prolific artist, Ariel Pink definitely makes a lot of throw-away crap, but there’s none of that on Haunted Graffiti. Only gems.

Have you ever given a copy of this record to anyone?  What were the circumstances?
I’ve never given away a physical copy of this to anyone. But it’s definitely made its way through my friends in the fluid ways of the digital age. Mixtapes, CD-Rs, hard-drives etc. Like I said, I haven’t seen the 2006 Paw Tracks re-release in stores for a while and the vinyl was mostly sold out by the time I became hip to it. At least one track from House Arrest has appeared on the majority of mixes I’ve made for friends, crushes, and girlfriends.

Which of the records that you’ve performed on is your favorite?
Definitely our new record, Heat Waves, is my favorite thing I’ve made so far. I play quite a bit on it, guitar, bass, tuba and vocal tracks. It’s fun to have so much creative control on a record, but at the same time you have to live with your decisions. Sometimes I wish I had someone else play the bass-parts for example, just to have another musical perspective. But in the end I’m incredibly pumped on the performances on this album.

What is your favorite song on the album and why?
That’s a tough call but I think that “Flat Earth” may be a favorite in the sense that it’s exemplary of what we’re all about as a band. Over the course of the song we tap into old school soul tropes as well as ecstatic, African-esque harmonies and rhythms. This sort of confluence of seemingly disparate influences is what I think BRAINSTORM does best.