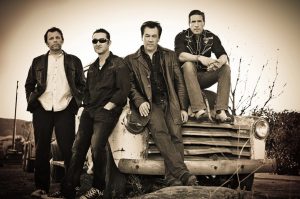 The Forty Nineteens’ newest LP Spin It ups the sonic ante by building upon harmonies explored on their 2012 debut No Expiration Date. The disc was accurately described as a modern take on the ’80s pop, garage rock, roots rock sound. It was listed in several best of 2012 lists, and was heard on commercial, college, and international radio in Spain, UK, Belgium, Sweden, South America, and Japan.
Spin It continues the bond between the band and producer David Newton (The Mighty Lemon Drops). His British Pop sensibilities are a perfect fit for the Forty Nineteens’ garage/pop sound.  Stevie Wonder sideman Kevin McCourt is back with his Hammond/Farfisa punch. Paul du Gre (Peter Gabriel, X, Los Lobos) returns to master their sophomore release on Heyday Records. The band joined up with Kool Kat Musik for international distribution, and provided a track for the upcoming political thriller The Algerian.
John Pozza (vocals,bass), Chuck Gorian (guitar), Chris Whelton (guitar), and Nick Zeigler (drums, vocals) have been opening for such bands as Gin Blossoms, The Fixx, Fleshtones, and Los Straitjackets side project The Outta Sites. Their band philosophy is simple: “Say what you have to say in under three minutes.” Influences include, Psychedelic Furs, the Byrds, Love and Rockets, Dramarama, Plimsouls, Elvis Costello, Tom Petty, The Rolling Stones. The Forty Nineteens continue their Motor City high-energy tradition that has earned them a loyal following that is growing daily. It all combines for one hell of a good time.
Ghettoblaster recently caught up with drummer/vocalist Zeigler to discuss his most prominent influence.  This is what he said about The Clash’s London Calling.
What is your favorite album?
The Clash’s London Calling.
Do you remember when you received or purchased the album?
In 1979 my sister worked at National Record Mart and would play it there all the time. If I recall, most of the people working there were into AM music, so no one really paid attention to the album. I bought the vinyl. Years later I made a CD copy of it with the pops and hisses. That’s how I want to listen to it in the modern format.
What is your favorite song on the album?
“Brand New Cadillac.”
What is it about the song that resonates with you?
I am a big fan of Elvis, and most ’50s artists.  The thing that really caught my ear was the obvious ’50s lyrics and melody. That connection on this track is probably what got me interested in learning more about the band and references in their songs. So much in fact, that at age seventeen, I took a Freddy Laker fligt to the UK. After hearing all the albums (along with the Who’s Quadrophenia) I wanted to go to the UK and see what was going on for myself.  I was late for my senior year of high school and was kicked out of school. Thankfully (perhaps) they let me back in. I returned six months later with my buddy Bryan and saw the Clash at the Lyceum. The band opened my eyes to what music is capable of.
Have you ever covered a song from the album?
“Brand New Cadillac.”
What is it about the album that makes it stand out against the band’s other output?
This album was a drastic change in direction from their previous albums. It seems to be a more focused record, discussing topics  that describe the world as opposed to the sociopolitical issues in their country.
Have you ever given a copy of this record to anyone?  What were the circumstances?
A younger coworker of mine was heavily into Rancid, and asked me to listen to one of their records. Discussing their Clash influences, I was surprised to learn that he never listened to London Calling. I loaned him the CD recording of my actual album.  Needless to say, he was floored by it, and went out and picked up a copy.
Which of the records that you’ve performed on is your favorite?
Our current disc, Spin It, is my favorite album. Simply because the band is really finding its groove with our producer David Newton. I was a big fan of The Mighty Lemon Drops. We became friends in the mid ’90s and almost became bandmates in a project that didn’t fully get realized.
What is your favorite song on the album and why?
My favorite track to play is “Pink ’55 Bel Air”. The song is just a stomper in the classic garage sense. There’s a sitar intro, a roaring bass, and two distorted guitar solos within 2:17 seconds and killer Farfisa keyboards chords in the chorus. It’s just a fun song for me to play. It kind of reminds me of The Savoy’s “Can It Be”  Though John wrote it and was  Inspired by a August 1958 Larry Williams song “Bad Boy”.
Listen to the band’s “Modern Romance” here: