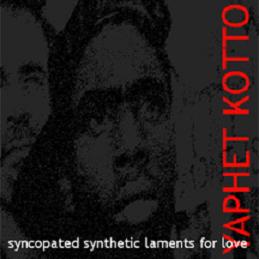 Cleveland, Ohio’s Harvey Pekar is a five-piece hardcore band fueled by incessant determination and work ethic, self-booking tours in support of their self-released Thirty Ghosts EP.  This caught the attention of Escapist Records, who will release the band’s Upward, Not Northward debut 12” in summer 2013.
Ghettoblaster had to know what influences, aside from the comic artist the band had and asked drummer Nate Kelly about his favorite album.  This is what he had to say about Yaphet Kotto’s Syncopated Synthetic Lament for Love…
What is your favorite album?
Yaphet Kotto’s Syncopated Synthetic Laments for Love.
Do you remember when you received or purchased the album?
I’ve had a digital copy of the record for years, but I didn’t own a physical until about six months ago. I was in Phoenix visiting my mom, and was wandering around town while she was at work. I found a hole-in-the-wall record store, and there it was in the used section. When I got back to my mom’s apartment, she gave me the strangest look [laughs].
What is your favorite song on the album?
“Of Epic Proportions” hands down.
What is it about the song that resonates with you?
From a lyrical standpoint, it talks about the weight of language, and how people hang on to the words -at times giving them more credence than they probably should. Through that people can be utterly crushed by the words of others. For instance, the act of speaking can be as damaging as a physical blow. In terms of the music, the song starts off as a high-energy song, but then it mellows out for a bit, and finally just explodes into this massive cathartic outro.  The outro always brings a smile to my face.
Have you ever covered a song from the album?
I would love to cover “Highly Enlightened,” but I hadn’t thought about it until you just asked.
What is it about the album that makes it stand out against the band’s other output?
It’s a perfect cross section of their music. On their first record, the transitions between the louder and softer parts of songs weren’t as seamless, and the production was a bit more raw. In most cases, I enjoy more rough-around-the-edges production, but that first record just doesn’t quite do it for me. As for the last full-length, the music took on more of a post-rock feel, which I can dig.  However, I’ll admit, I didn’t care for it too much coming from my favorite band.
Have you ever given a copy of this record to anyone? What were the circumstances?
Sadly, most of my friends aren’t too big on the screamo jams, and most of the friends that are into screamo were already down with Yaphet Kotto by the time I got into them. Still, I have managed to get one or two of my friends into them, which is a great feeling. With the Information Age being what it is, nobody really wants burned CDs anymore unless they’re mixes, so I’ve never actually given a physical copy to anyone.
Which of the records that you’ve performed on is your favorite?
Our first full-length Upward, Not Northward is the only record I’ve performed on so far, so I’d have to go with that [laughs].
What is your favorite song on the album and why?
The closing track, “Blasé Babes.” The end movement of the song is this really intense, and actually sort of reminds me of Yaphet Kotto, and that’s always a plus [laughs]. We end our set with it, so I just go totally ape-shit and let it all out. It’s an awesome, therapeutic experience.