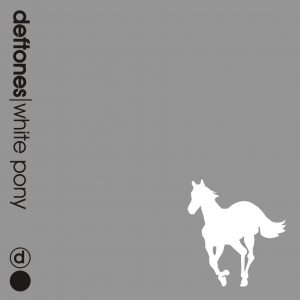 Bristol-based band Empty Pools have another new single coming out on Battle Worldwide Recordings label. Called “Small Talk,” the single is another confident and assured track from Empty Pools, who are starting to build a very strong collection of tunes for their first album.  With the single, the band exhibits delicate precision and angular rawness of often-overlooked college-rockers like Cymbals Eat Guitars.
Naturally, Ghettoblaster was compelled to ask the band about their influences.  Matt Wilson, the band’s bass player was willing to offer up a look at his favorite album, Deftones’ White Pony.  This is what he said about it…

What is your favorite album?
That’s such a hard question, there are so many incredible, important or meaningful albums out there, albums that get you through stuff or really emotionally resonate with a particular time in your life. Those albums that are products of masters of their crafts or albums that just change the way you listen to music. Picking just one is so tough and totally artificial so with that in mind one of my “favourite albums” is White Pony by Deftones
Do you remember when you received or purchased the album?

Not exactly. I would have been about 16 and remember I was going through a phase of buying Kerrang and Rocksound magazine every week (mostly to harvest posters to put up on my bedroom wall.) I had been really getting into heavy music and was listening to loads of bands from America (I guess what became labeled Nu Metal, but was really just different bands drawing on metal, hardcore, alternative, punk influences as well as other non heavy music genres) and I had read feature after feature about the new Deftones album and was so excited to get hold of it.
What is your favorite song on the album and why?

I love “Rx Queen,” this gritty and dark love song which kicks off with a drum groove that sounds like it could have come from a Timbaland production, all disjointed, linear and angular, then this haunting Tarantino-esque guitar line comes in over the top that has this eerie feel. The lyrics are the story of someone in love with a woman on medication for a severe illness, there are these moments in the vocal melody where Chino pushes his voice so it’s just off the note in this way that is almost uncomfortable and mirrors the tension and darkness in the lyrics.
What is it about the songs that resonate with you?

Chino Moreno’s vocal style is completely unique and engaging, he combines these aggressive techniques from hardcore and hip-hop with almost whispered, haunting, very unconventional melodies. The lyrical content is incredibly dark but not in the way usually associated with heavy music. A lot of the lyrics are written in the third person but rather than being about dungeons or dragons, demons or Satanic rites, his lyrics have a gritty dark urban style that you might associate with someone like Frank Miller. This also helped the band steer clear of the ‘mad-at-dad’ type of lyrics that gave an easy cliche for many to dismiss much of the heavy American music of this era. Something that I think is often missed about much heavy music is that in the best bands, underpinning the bludgeoning riffs there is always a great groove. With the Deftones, it’s this sophisticated, intentionally slow so as to be uncomfortable, but highly compelling groove that points to the links all rock music has with r’n’b, soul and blues. These rhythms that make you want to move. I still love to dance in my kitchen to this record.
Have you ever covered a song from the album?
I remember learning an acoustic version of “Change” that would get wheeled out round camp fires or at open mics in a very pretentious manner.
What is it about the album that makes it stand out against the band’s other output?

On White Pony, Deftones took the sonics of their previous albums even further than on the previous two releases. They play with electronics, using samples, loops and effects to create really haunting ambient soundscapes that really beautifully contrast the razor sharp, sometimes dissonant guitar riffs of Stephen Carpenter, making them seem even more brutal when they cut in. I love the way they draw on influences from all over the sphere of pop, not just heavy or even guitar music but including elements of hip-hop, new wave, dream pop, electronic and shoegaze to create a entirely original and valid musical presence that avoids the pitfalls of tokenistic genre hopping, feeling totally natural and wholly affectionate.
Which of the records that you’ve performed on is your favorite?
Like most musicians I’m totally excited about the project I’m working on at the moment. It’s often hard to listen back to old records and the energy is always about what you’re writing and creating at the moment. We’ve got pretty much all the drum and bass parts tracked for Empty Pools’ debut album and its sounding great so I can’t wait to hear the finished product and get it out there.